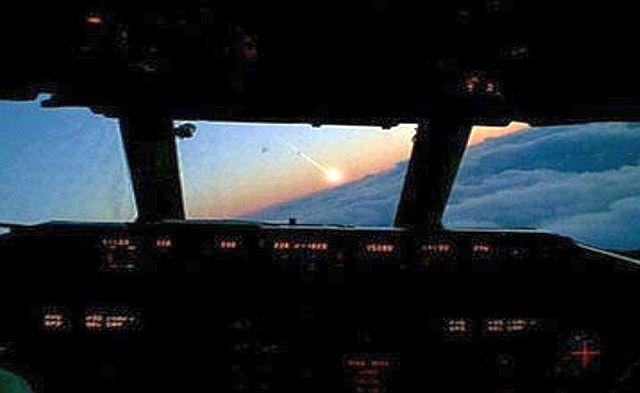 One of the biggest arguments that UFO skeptics offer is the fact that if UFOs are visiting Earth they would be caught on video all the time since everyone has a camera in their phone now. This argument is inherently invalid because the slightest amount of research would show that sightings are captured on photograph and video every single day all around the world.

In fact, an organization called "MUFON" collects dozens of these sights into a massive database each day.

On November 9th, a British Airways flight with the call sign "Speedbird94" spotted a UFO flying in close proximity to the aircraft. The pilot radioed into Shannon Air Traffic Control (ATC) in Ireland and asked if there were any military exercises taking place in the airspace around the Boeing 787 but ATC confirmed no military exercises were happening.

The pilot radioed to ATC that the object appeared as a "very bright light" and had flown along the left side of their Boeing 787 before it "rapidly veered to the north" and then "disappeared at a very high speed." The ATC at Shannon replied, "There is nothing showing on either primary or secondary (radar)."

The pilot then said, "OK. It was moving so fast." The ATC controller asked, "Alongside you?" The pilot of another flight, this one a Virgin Airlines Boeing 747 with the call sign "Virgin76" then joined the radio conversation to report they too saw several bright lights and there were "multiple objects following the same sort of trajectory". The Virgin Airlines pilot also confirmed details about the objects being very bright and moving at extremely high speeds.

The British Airways pilot was flying from Montreal to Heathrow and described how the UFO came up along the left-hand side of the Boeing 787, "then rapidly veered to the north". She also described it as "a very bright light" that "disappeared at very high speed" leaving her to wonder what it was. Air Traffic Controllers admitted they received multiple reports of the objects and said they would pass the information on to the proper authorities.

The Irish Aviation Authority released a statement saying, "Following reports from a small number of aircraft on Friday, November 9, of unusual air activity, the IAA has filed a report. This report will be investigated under the normal confidential occurrence investigation process." The ATC communications with the British Airline <a href="http://archive-server.liveatc.net/einn/EINN-High-Nov-09-2018-0630Z.mp3">can be heard here starting at 17:50.</a>

Another bizarre sighting was captured on Sunday when a woman in St. Helens, Oregon recorded color-changing crafts that have appeared over her house two nights in a row. She captured this stunning video of the as-of-yet explainable objects.

Little 'Major' Soldier Boy, your obsession with UFOs is so infantile and pointless. The photograph you've attached to your story is a METEORITE, not a UFO. you're a douchebag.

Jenny Hansson (that news anchor) is SUCH A PIECE OF ASS, it's amazing. To hell with UFOs. She's so hot that UFOs don't matter.

Why would aliens want to fly over some stupid bitch's house? What would they accomplish ?

Until you see one unmistakeably you think they are fake. It will change your entire life.

I'm a trained observer with 105hrs fixed wing and have seen a few in my lifetime too.