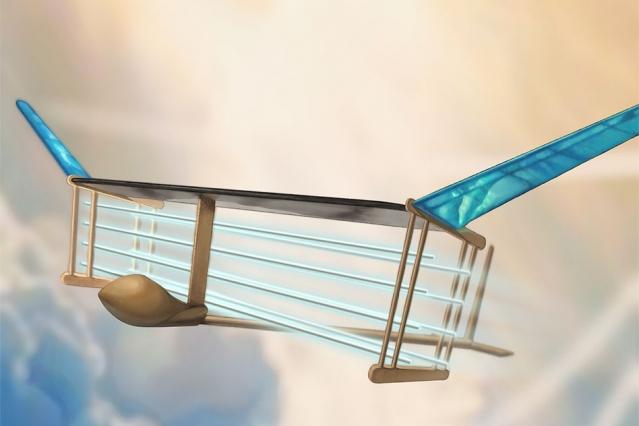 It has been over 100 years since man first took flight and the technology has advanced exponentially ever since. One thing that all the iterations of aircraft had in common were moving parts, until now. Engineers from MIT are moving away from propellers, turbine blades, and fans and are testing a new design which has no moving parts at all.

Up until now, aircraft have used all manner of propulsion from fossil fuels to battery packs and rockets, but now engineers at MIT are working on a light aircraft that is powered by an "ionic wind". The engineers describe "ionic wind" as a silent but powerful flow of ions that are produced on the aircraft itself and generate enough thrust to propel the plane.

Unlike its predecessors, the new light aircraft does not need fossil fuel to fly, nor does it need any propellers or moving parts at all, it will be completely silent. Steven Barrett, associate professor of aeronautics and astronautics at MIT says, "This is the first-ever sustained flight of a plane with no moving parts in the propulsion system."

Barrett continued, "This has potentially opened new and unexplored possibilities for aircraft which are quieter, mechanically simpler, and do not emit combustion emissions." For the near future, Barrett predicts this new technology could be applied to make less noisy drones, but in the future, he sees ion propulsion paired with more traditional combustion methods to create a more fuel-efficient aircraft, sort of like a hybrid car that can switch from gas to electric.

Barrett admits his initial inspiration for the team's ion plane comes partly from his love of the "Star Trek" series as a kid. He says he was always inspired by futuristic shuttlecrafts that could skim effortlessly through the air without any noise, exhaust, or moving parts. "This made me think, in the long-term future, planes shouldn’t have propellers and turbines," Barrett says. "They should be more like the shuttles in 'Star Trek,' that have just a blue glow and silently glide."

His journey to achieve the "effortless skimming" shuttlecraft he dreamed of as a kid started nine years ago when he began looking for ways to design a propulsion system with a single requirement, the plane could have no moving parts. Throughout his years of research, he eventually came across "ionic wind", also referred to as electroaerodynamic thrust which was first discovered in the 1920s.

Electroaerodynamic thrust is achieved when a current is passed between a thin and a thick electrode and if enough voltage is applied, the air between the electrodes can produce thrust, perhaps even enough to propel an aircraft. But electroaerodynamic thrust has only been a hobbyist's dream for years and had only been demonstrated in small, desktop "lifters" tethered to huge batteries. Until now, it has been assumed that it was impossible to propel a large aircraft using this method of propulsion.

"It was a sleepless night in a hotel when I was jet-lagged, and I was thinking about this and started searching for ways it could be done," Barrett recalls. "I did some back-of-the-envelope calculations and found that, yes, it might become a viable propulsion system and it turned out it needed many years of work to get from that to a first test flight."

It seems that Barrett and his team of engineers at MIT may have finally produced a working aircraft that uses ionic wind and contains no moving parts. "It took a long time to get here," Barrett says. "Going from the basic principle to something that actually flies was a long journey of characterizing the physics, then coming up with the design and making it work. Now the possibilities for this kind of propulsion system are viable."

"MIT are working on a light aircraft that is powered by an "ionic wind".

"Unlike its predecessors, the new light aircraft does need fuel to fly, nor does it need any propellers or moving parts at all, it will be completely silent. "

Is it powered by I-Wind or fuel?

This article is deceptive. Ionic wind has been around forever and this guy just mounted an ionic filter element under each wing. It would be a great story if he was doing it without fuel. But electricity is a fuel and he is using a bunch of it. And WTF is this supposed to mean? "Unlike its predecessors, the new light aircraft does need fuel to fly, nor does it need any propellers or moving parts at all, it will be completely silent. " I didn’t know we already had light aircraft that didn’t need fuel to fly? But then the next word… “nor”?My 70 yo light aircraft uses 4.5 gal per hour, maybe it’s too modern to not need fuel? Or maybe you are talking about a glider? I guess you could pack it up a hill and figure something out, but the normal way would require fuel in the tow plane. This elaborate ionic lifter turned sideways with wings is nothing. The solid state system to maneuver it by varying the voltage is new. Where’s this thing getting its power? It has to be from very fine light wire or a tiny LiPo pack, probably both. LiPo for the control circuitry and wire for the hv. I guess with that short trip it could have been “charged” like a capacitor? It really doesn’t fly, more gliderish than self sustaining and it really didn’t turn either. Disappointed ☹️

The first and only ion propelled aircraft that can carry its power supply using solely ion wind, is called the "Self Contained Ion Powered Aircraft." US Patent No. 10,119,527.
The MIT project began about 15 years later than the patented version and is surprisingly less powerful and efficient. There are 5 public flight videos online.