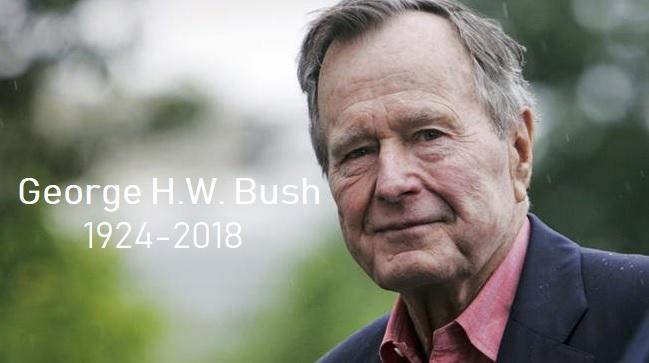 Former President of the United States George Herbert Walker Bush has died on November 30, 2018. He was the last of the U.S. Presidents to have served in World War II and held a single term in office from January 20, 1989, to January 20, 1993. Although brief, his time in politics helped shape the politics of the coming decades. His son, George W. Bush confirmed the death of his father in a statement Friday evening.

Statement by the 43rd President of the United States, George W. Bush, on the passing of his father this evening at the age 94. pic.twitter.com/oTiDq1cE7h


The former President was 94-years-old when he died and had just lost his wife Barbara last June who he was married to for 73 years. Since her passing, He has been struggling with medical issues such as a blood infection. The short but effective term saw the last days of the Cold War and brought about a family of politicians who would influence America for decades to come. Spokesman Jim McGrath offered an official statement announcing the tragedy on Twitter.

Statement by the Office of George H. W. Bush on the passing of the 41st President of the United States of America this evening at 10:10pm CT at the age of 94. pic.twitter.com/XUPgha2aUW

Bush was caught by the allure of the political life in 1962 when he was chosen to head Houston's fledgling Republican Party. He worked tirelessly over the next thirty years in the political world to bring about a positive impact. His days as a politician and as President were free of any scandal for the most part, except for his involvement as vice president during the Iran-Contra scandal.

George Herbert Walker Bush was the second oldest of five children and was born in Milton, Massachusetts on June 12, 1924. His parents were Prescott and Dorothy Bush and they moved Bush and his siblings to Greenwich, Connecticut shortly after he was born. He would go on to graduate from Yale University in 1948 before setting out to Texas where he would work as an oilman. Eventually, Bush became a Congressman for Texas and remained one of the few surviving World War II veterans.

He was appointed to be U.S. ambassador to the United Nations by President Richard Nixon and would later go on to become the chairman of the Republican National Committee. As soon as he graduated from Phillips Academy on his eighteenth birthday, he enlisted in the U.S. Navy. He went on to complete a 10-month course before being commissioned in the United States Naval Reserve at Naval Air Station Corpus Christi on June 9, 1943

Following his role as U.S. ambassador to the UN, he eventually became Director of the CIA in 1976. Then the new President Gerald Ford appointed him to be envoy to China back in a time when the two countries did not have formal diplomatic communication. The Berlin Wall fell in 1989 while Bush was in office and the Soviet Union was just showing its first signs of collapse as his term ended.

Despite his old age, Bush senior would frequently attend ball games around Houston, appear at numerous charity events, and take photos with young people. He was awarded the Presidential Medal of Freedom by Barack Obama in 2010 and he made one last parachute jump at the age of 90.

After the age of 90, his health began slowly declining and he eventually lost the ability to walk. He was last seen shaking hands with attendees of his wife's funeral during public visitation. It is said that the senior Bush held his wife's hand the entire day before she passed on.

Maybe now the unredacted full report on Kennedy can and will come out.

The man who killed the Republican party and ushered in that 2 bit phony, Bill Clinton. Bush never met a democrat proposal he didn't like, except the cable bill which he should've supported.

No. 91957
Too many other "Bush's" still are still in politics for the FULL report to be released.

In other words not in ours, or several lifetimes.

While is sad to see any President die.
Daddy Bush was a flash in the frying political pan. His real power and fame came from his other political position...

Director of the CIA and the skunkworks projects he ran.

he should have been executed long ago along with his nasty sons, Cheney and Rummy for 9/11. these people are psychopaths.

Good fuckin riddance. May he rot in hell, where he belongs. Unfortunately, there are many Luciferian, NWO pieces of garbage still existing.

The Bush's looked like strong defenders of Conservativism and American values and ideals (voted for both), that is until Trump came along and exposed RINOS, MEDIA, HOLLYWOOD and DEMS for the traitors to democracy and freedom (from government) they truly are. Back then I thought they (republicans/democrats) actually had different visions for America's future but in fact it was a single vision of globalism. Notice how POWER was (and is by those mentioned above) always being ceded upward and away from individual citizens (cities to states, states to feds, feds to international interests, int interests to central banks - saved in 2009). Leftists think for now they are getting justice but little do they realize it's the same bill of goods sold to the Venezuelans by Hugo Chavez and now Maduro. They need to listen to Hugo's speeches.