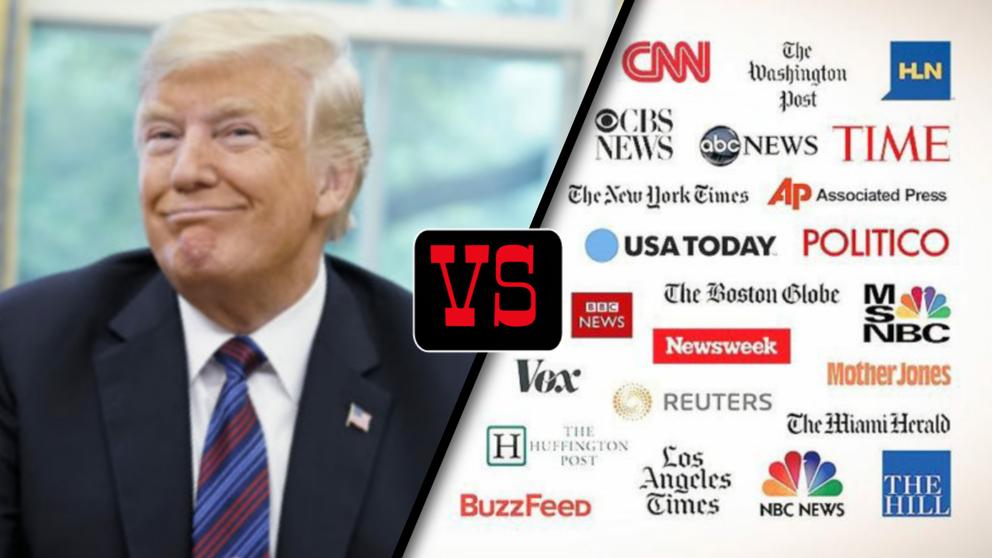 The “fake news” mainstream media is hated in America, and it's in part to the lies and slanderous if not libelous claims they've perpetrated against the 45th President of the United States of America, Donald J. Trump.

@realDonaldTrump and @FLOTUS made a surprise late in the night Christmas trip to Afghanistan to visit the troops.
Thank you both and thank you to our amazing military personnel all around the world. #BringThemHomehttps://t.co/KxIy9Ie5Vz


President Trump made an unannounced visit into Afghanistan to visit US troops, which was to secure his safety as well as that of our forces serving abroad who would likely become a target if the enemy knew Trump and the First Lady were on the way.

The American media engaged in raging lies on social media, with NBC News even writing, “Trump was the first President in fifteen years to not visit troops.”

Trump and Melania were in Iraq visiting American troops on Christmas.

Will NBC News apologize & retract this partisan lie that received thousands of RTs?


Even liberals on social media called out the lies.

President Trump had already given the US soldiers and service members serving abroad the greatest Christmas present they could ask for when he decided to withdrawal all US forces from Syria.

Some say President Trump's supporters on social media have forced the Administration’s hand in bringing down the total number of forces in foreign countries.

Others argue that President Trump has known the truth the entire time, citing the fact that Trump ended the CIA program of arming moderate rebels in Syria last year.

In an added gift to withdrawal from Syria, President Trump cut the total number of US forces serving in Afghanistan down by 50%.

As part of Trump's broad-scale “America First” agenda, the President loudly proclaimed that America could not afford, nor has the desire to be the world's policemen.

But the media couldn't resist spreading their lies on social media.

This tweet is how FALSE information is spread. There’s a vast difference between “watching TV” and “video chatting with troops”. Knowing the difference and you still haven’t deleted this tweet just illustrates your propensity for shilling fake rhetoric.


Trump has an enormous approval rating among Republicans despite the endless propaganda from the “fake news” working against him.

Trump has an 89% approval rating among Republicans.


Even the likes of a woman who falsely claimed to be Latino to get elected have taken to Twitter to attack the President.

Joy to the World!

Merry Christmas everyone - here’s to a holiday filled with happiness, family, and love for all people. 🌎(Including refugee babies in mangers + their parents.)

Jesus Christ, the Lord, and only Messiah to mankind was not a refugee, nor was his family.

Joseph & Mary were in Bethlehem to take part in a census. But thanks for trying to torture the story of the incarnation of the Lord to make a banal political point on Twitter. https://t.co/wFk7PkSIZb


Jesus’ Stepfather Joseph and his Virgin Mother Mary were only in Bethlehem for a Census, which is a government mandated headcount of the population. She should probably read her Bible sometime if she reads one at all since recently proclaiming she is of Jewish origin.

Legitimate frustrations still exist among the Trump base, largely in part to the compelling desire of the left to stand opposed to what best benefits the American people.

Despite horrendous soaring crimes of illegals in America, SCOTUS ruled against the President's order of refusing “Asylum” to any illegal who doesn't follow procedures in the allocation process.

The question everyone is asking is, why are we dropping off migrants in El Paso?@realDonaldTrump https://t.co/DZOcn0wIKK


Those frustrations are legitimate, as are the concerns of illegals being released into society.

That said, the blame is on the SCOTUS ruling and the influence of Democratic Party officials in local governance.

Trump and Melania were in Iraq visiting American troops on Christmas.

Will NBC News apologize & retract this partisan lie that received thousands of RTs?


The media doesn't seem to like that idea, almost as if their loyalties are to a nation outside of America. No matter what Trump says or does that benefits the nation at home before those interests, they go into a fit of rage attacking his goals and desires.

They seemingly forget that this President promised his voters “America First,” and continues to promote this agenda as President.

The government is currently under a “partial shutdown” thanks to the Democratic Party’s refusal to give $5 billion to build the proposed border wall that elected Donald Trump.

Why is this happening? Almost 600 caravan horde people were released in El Paso over the holiday!

ICE claims the release was to comply with federal guidelines that prevent them from detaining families longer than legally permitted.#TrumpTrainPortal https://t.co/BCyeIHRuLs


Pressures from liberal-leaning courts and biased Democratic Party leadership have forced the Immigration and Customs Enforcement agency to release illegal aliens that were once being held in custody.

That is small pox. We are treating diseases at the border that we have eradicated decades ago. For those that feel the idea of letting them all in is a great idea? This idea of open borders is for political expediency that you and I will pay for with our health. Wake up pic.twitter.com/5vk0YzK4M8


We've seen what type of people they're sending across the border, but where is the media reporting on these dangers?

The answer is that such reporting is nearly non-existent, outside of some obscure truth-telling outlet that gets little to no media coverage on television.

Most of these #ShutdownStories are fake. The budget for the largest government department, the DOD, was signed months ago.

As for the rest, it's sad to see right before the holidays, but they got paid on the 15th. Otherwise, all essential services are functioning.


We see the same fear-mongering over the government's partial shutdown when in reality essential services are still being provided.

Take everything you here on the propagandist television “news” stations with a grain of salt.

This President is the single greatest supporter of American troops in the last quarter century of elected officials, quite possible in the history of the nation.

There is no greater benefit to the men and women who serve than to reunite them with their families.