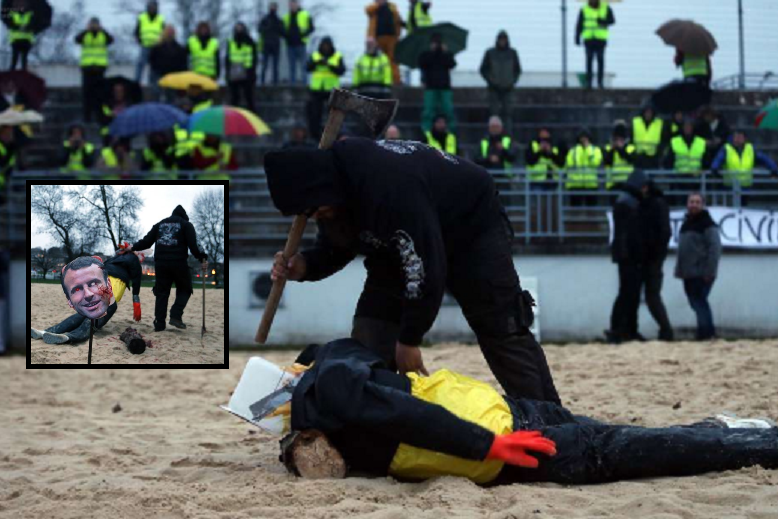 The French government arrested several ‘gilets jaunes’ (yellow vest) protesters yesterday after one of their actions was condemned in the media. A group from Angoulême in the south of the country had participated in a mock trial and subsequent beheading of a doll representing President Emmanuel Macron.

Although most foreign press focuses on the protests in Paris happening every Saturday, it is in the south of the country, in poorer parts of cities like Bordeaux and Marseille that the more violent scenes are now taking place.
Last week Friday they had symbolically decapitated a doll with a picture of the French president Emmanuel Macron during a spectacle that dozens of people all dressed in the ‘gilets jaunes’ attended. The scenes are reminiscent of past beheadings of former heads of state during the French revolution.

The bloody piece of theater led to a complaint with the public prosecutor. The event was indicated at the department of Charente, but the city claims it wasn’t informed about the details of the action.

The department head of the city of Charente spoke in a statement of "serious violations against the person and function of the president".

The three men were questioned by the police and have to spend a night in the cell. It is being investigated whether they have been guilty of "public provocation to commit a crime" and "aggression towards an official with a public function".

In the meantime, Prime Minister Edouard Philippe has sharply condemned the action of the yellow vests in Angoulême.

The lawyer of the three men declared that his clients are victims of a "heavy mediatisation of a piece of theatre," adding that they are aware of the shocking nature and are willing to apologize.

Three journalists from the local newspaper Charente Libre who had reported on the action were also questioned to provide more details as to what was said and done during the mock trial.

Meanwhile the ‘gilets jaunes’ movement is calling for another big manifestation on the Champs-Elysées in Paris on New Year’s Eve. It also expected that several hundreds of them will show up in Paris again today. Although the French government has made several concessions towards the protesters, many of them say they will only stop when President Macron resigns.

What do you expect from the #FakeNews media? I am very sure you're right, Chris Adams, thousands! They're trying to hide it from the world.

Last night I had a wet dream, I dreamed that I woke up and everything was wrong Yellow Hell was freezing and the guillotines in the streets of the EU are making the rounds. In the morning at &: 00 I am awake.