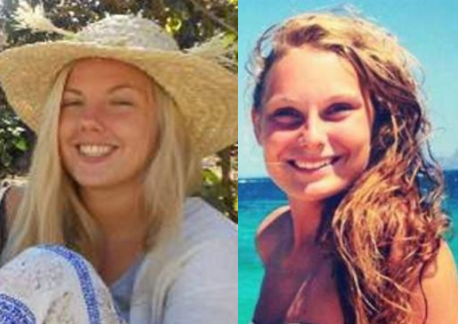 Moroccan authorities have released new details of what preceded the horrible murder of two Scandinavian tourists in Morocco at the start of last week. They explained how the four main suspects hurriedly formed a terrorist cell and went hunting for backpackers in the Moroccan mountains because they knew it would be filled with tourists.

The bodies of Louisa Vesterager Jespersen (24) from Denmark and Maren Ueland (28) from Norway were found last Monday in the Atlas Mountains. They had set up their tent in a remote area two hours' walk from the tourist town of Imlil. That village is the starting point for those who want to climb the Toubkal, with its 4,167 meters the highest mountain in North Africa. One of the two students had her throat cut, the other was beheaded.

Soon the four main suspects were identified. They were arrested within three days. One of them had made a movie of Louisa's murder and shared it on social media. There it was immediately shared thousands of times by Muslim extremists. The Facebook pages of the family of the victims - including Louisa's mother - were also bombarded with gruesome images of the execution of the young women.

Initially, it seemed that Islamic State (IS) was behind the attack. Detectives in Morocco and Denmark found a video online in which the four suspects swore allegiance to Abu Bakr al-Baghdadi - the leader of IS - with a home-made black IS flag in the background. The images were recorded a week before the gruesome killings. But in the meantime, it is assumed that the perpetrators were 'lone wolves' and acted without consultation with the terrorist group.

The four - two street vendors, a plumber and a carpenter, all between 25 and 33 years old – are thought to have recruited some 15 others just before the attack and have hastily formed a terrorist cell.

This video was posted by Louisa on her Instagram. The video was posted a week ago. Her and Maren (the woman in these screenshots) died later that day... They had no idea, what horror, they were about to experience/go through😥😔 #LouisaVesteragerJespersen #MarenUeland #tragedy 💔 pic.twitter.com/7t1MzqeZgy

"The emir of the group was Abdessamad Ejjoud, a 25-year-old street vendor who lived on the outskirts of Marrakesh," says Abdelhak Khiam, the head of the Moroccan Central Bureau for Forensic Investigation.

"The terrorist cell then discussed how best to carry out an attack in Morocco," Mr Khiam continues. "They decided that they would take aim either at Moroccan security services or foreign tourists."

Two days before the double murder they traveled to the area of Imlil "because there are many tourists coming," said Mr Khiam. "In a remote area, Ejjoud, Younes and Afatti chose the two students as a target, without actually preparing their attack. The women were robbed, stabbed with knives, their throat cut and decapitated. "

Our hearts bleed for the families and friends of these two young women , the "Golden Sisters" Louisa Jespersen and Maren Ueland, taken way too soon by evil hands.

The police raided several houses in Morocco after the attack and now 19 suspects are in prison. They also seized electronics, a non-licensed shotgun, knives and equipment with which a bomb can be made.

According to the Moroccan police, the entire cell has now been dismantled. Three of the suspects had a criminal record with terror-related crimes. For example, Ejjoud had already been detained because he had tried in 2014 to reach the IS area in Syria and Iraq. "He eventually got a reduced sentence, but remained true to his extremist ideas," Khiam said. "It was he who spoke in the video in which the main suspects swore allegiance to IS."

Morocco - which is heavily focused on tourism - has largely been spared from terror attacks since 2011.
Then, on April 28, 17 people died in a bomb attack on a café on the famous Jamaa el-Fnaa square. Many of the victims were European tourists.

They both had their heads cut off, it on the video. The 18 hajis raped them before and after. Guess hajis like that fuck em in the neck shit. And the Libtards want them to take their show on the road to a mosque near you

one of the girls had a muslim propaganda video on her facebook page showing a woman afraid of a muslim man when the police spring out of their car and race toward him only to run past the 'good' muslim and arrest a well-dressed white man selling drugs. yeah, right..... many responded with the video of her getting her head SLOWLY, VERY PAINFULLY severed by the sub-human Muslim scum. her page has since been taken down...... be careful what you ask for foolish white people.

So will they get “Eye for an eye” justice? All of them should have their heads slowly sawed off publicly... film it and post it for the world to see. This type of enforcement will put a stop to this shit quickly.

Its their culture mang! Sluts want to commit bestiality, well occasional skull f*cking sessions will occur. In this case these monkeys diversified every orifice and ingeniously created more. Only a moslem would think to play wienie waggle with a bloody skull while her friend watched. They just be keeping it real, an sheeit