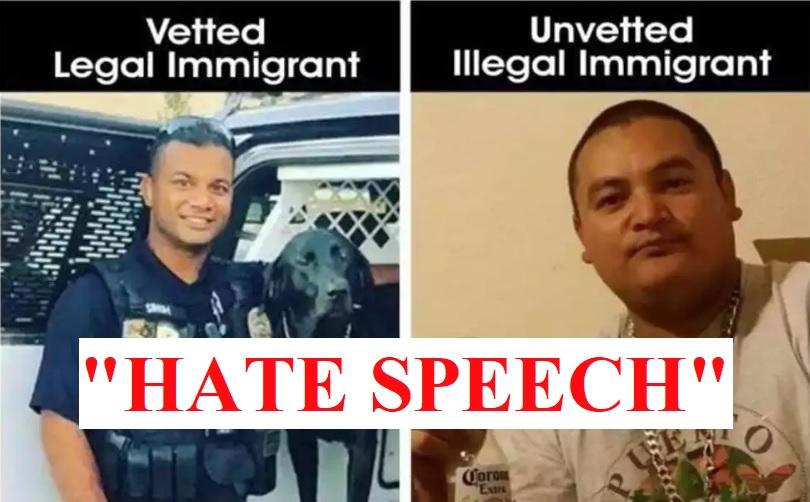 Facebook Suspends Accounts Referring To Cop-Killer As An "Illegal Immigrant"

When a law enforcement officer in Newman, California was shot and killed in a traffic stop on December 26, 2018, media outlets around the nation reported on his death. Many tributes and posts were honoring fallen Corporal Ronil Singh who died in the line of duty. When reporting the facts around the incident, authorities confirmed that the suspect was in the United States illegally and his lack of citizenship made identifying him that much more difficult.

Police tracked down the suspect and managed to locate his vehicle. They executed a search warrant at the mobile home complex where the truck was found and found the suspect not too long after. Corporal Singh was shot and killed less than 100 miles from Facebook headquarters, which means he died protecting the community of workers at the social media company.

Now that company is dishonoring his memory by suspending Facebook users who refer to the suspect, Gustavo Perez Arriaga, 32, as an "illegal alien" or "illegal immigrant" citing that use of such language is against their "hate speech" and harassment policy. If this isn't the nail in the coffin for all of the people who still use Facebook with an ounce of decency, I don't know what is.

Arriaga is not only charged with murdering Corporal Singh, he has had several run-ins with the law in the past and openly promoted himself as a member of the Sureno street gang. Sheriff Christianson of the Newman police department said Arriaga had two previous drunk driving convictions in Madera County. Facebook's stance on censoring crimes committed by anyone is unacceptable. Not only was Arriaga an illegal immigrant, but Corporal Singh was a legal who came to the United States lawfully.

"This suspect, unlike Ron – who immigrated to this country lawfully and legally to pursue his lifelong career of public safety, public service and being a police officer – this suspect is in our country illegally. He doesn't belong here. He's a criminal," Sheriff Christianson said.

A sheriff deputy posted the following image on Thursday afternoon:

The post was up for only a few hours before his account was suspended for 30 days and he was told "This post goes against our Community Standards. Only you can see this post because it goes against our standards on hate speech."

This response is disgusting. They care more about a low-life, non-contributing, illegal alien who has been convicted of drunk driving twice and not deported probably because he has been using a stolen identity of a real American citizen. This scumbag should be sentenced to life, and if he ever gets out, he should be immediately deported.

A writer at Blue Lives Matter wrote a story in the past about a low-speed collision where a suspect beat a police officer and ran off. The article got his page suspended. Facebook said it was because his post implied that it was humorous and not sad that the poor, violent criminal was stopped by a good Samaritan who bumped him with his pickup truck. Another Facebook user named Dana Marie says she did not even post a photo of the alleged killer, she only posted images of Corporal Singh and wrote the text, "This is officer Singh. He was killed by an ILLEGAL ALIEN 5 hours after he took this picture with this beautiful wife, baby, and k9! This is precisely why we need to #buildthatwall! RIP hero."

Facebook goes against everything America stands for; I encourage people not to use this platform and find other social media networks that don't push a political agenda and censor people for speaking truth. And what has the response of the California politicians who are responsible for the legislation that harbors murderers like Arriaga? Nothing. Only one California politician acknowledged the death of Corporal Singh. It is as if California liberals treat legal immigrants like criminals and illegal immigrants like the victims.

Of the 53, only one, that's right, ONE, wrote a tweet about the murder of Corporal Singh, @GOPLeader Kevin McCarthyhttps://t.co/8bYDC7thkw

ILLEGAL should get life in solitary...or bring back Public Hanging!!!