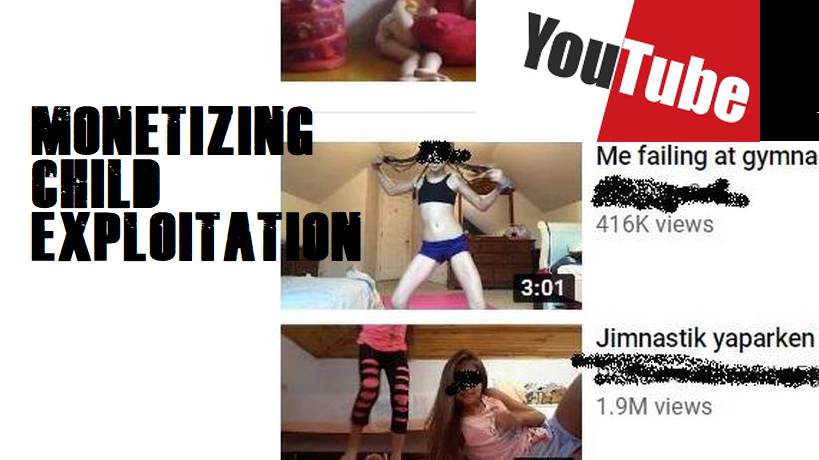 #YouTubeWakeUp: Who Cares About the Child Exploitation Crisis on YouTube?

Regular readers of The Goldwater recall us covering (for years now) YouTube's complicity in child exploitation. A recent viral video exposing this, however, has finally made this problem too large for even Youtube to ignore. Some of their advertisers now find themselves embroiled in quite a mess. When we covered the convicted rapist and pedophile who ran the SevenAwesomeKids network of channels, we detailed how some models were earning $20,000 per month - envelope-pushing, borderline softcore child pornography is big business at YouTube. Several million users subscribe to the channels in the SSG network.

YouTuber MattsWhatItIs made a list of advertisers whose videos aired amidst questionable material related to young girls. Many of these videos are flanked by a toxic cesspool of a comment section (complete with timestamps) ogling risque images of children.

YouTube is too busy tracking down conspiracy theories videos to get rid of their MASSIVE child exploitation issue. #YouTubeWakeUp! pic.twitter.com/bUlEMbWnsp

Fighting "fake news" and "extremism" is a priority for Youtube, but the fact that auto-suggest creates a virtual pedophile playground has gone unnoticed.

Mentioned in our article last September, the BBC and London Times spoke with several members of the "Trusted Flaggers" program at YouTube who say their hands are tied and complaints related to child exploitation are backlogged.
To Catch A Vigilante: Is Media More Concerned With Pedohunters Than Rampant Online Grooming?

Some videos found in this pedophile ring rabbit hole ran in the millions. The SevenAwesomeKids network amassed 12 billion views until the man running it was arrested for assaulting a young girl.

The situation is becoming too big for YouTube to ignore though. As dead set as they are on getting rid of fake news, conspiracies and hate speech, you would think they could spend a bit of time trying to make sure young children aren't targeted for exploitation in the downtime. British foreign minister Jeremy Hunt called on Google to "cooperate with UK, US... in removing child abuse content" rather than working with China to help censor the internet there.

In the past 48 hours, Forbes, Tech Crunch and others have weighed in on the matter in light of the video exposing how YouTube monetizes child exploitation.

In the Forbes article, it notes how some of the accounts even "liked" obviously perverted comments left by pedophiles. Forbes also notes how few mentions in the press have cropped up about this serious issue.

An unpublished interview with a trusted flagger showed that only 2.8% of the reports related to child exploitation and endangerment were ever even reviewed. Meanwhile, YouTube channels like Mumkey Jones were deleted for "bullying" dead mass murderer Elliot Rodgers. The Goldwater has proudly received content strikes for things as inconsequential as merely mentioning the fact that YouTube was flagging channels for Parkland false flag conspiracy content.

Below you'll find the video "YouTube is Facilitating the Sexual Exploitation of Children, and it's Being Monetized." A warning: it is disturbing. Unlike some of the videos we've included in previous coverage, nothing is blurred out nor is it audio only.


And these are videos monetized by companies like GNC, McDonald's, Disney, Ikea, etc. Comment sections a toxic cesspool of pedophilic commentary. pic.twitter.com/GFcWMgFH6Y

In the video, Matt points out several inappropriate videos that led to a "wormhole into a soft-core pedophilia ring on YouTube." The comments link to bonafide child pornography and WhatsApp accounts led even further down the dark spiral. McDonald's, Disney, Reese's, Purina, Grammarly, Ikea are subsidizing this dark industry.

Its fucking cool how.. Twitter blocks the autocomplete for "#wakeupyoutube", "#youtubewakeup" and the un-hashtagged versions and every variant of it. Even though there's been tens of thousands of people tweeting about it in the last 12 hours. Its also not on trending hashtags.

Below is contact information for advertisers whose videos are monetizing child exploitation. Remember, the only way to get the attention of YouTube is to hit them where it hurts: in the wallet.


Our past coverage of this issue mentions the good folks at Exposing Exploitation who have recently rebranded to Academy Awareness. I recently spoke with them about the necessity for a rebrand due to infiltration by pedophiles. A shame, yes, but also a sign they're on the run.

it was necessary to make it obvious to all the online population world-wide that the focus is education and spreading awareness. Exposing Exploitation is a name that when used for a public server was likely attracting the elements you described. Rather than burden ourselves with chasing ghosts & demons who in all likelihood were far more versed as staying hidden and untraceable, the focus had to shift back onto 1) protecting children online who were at risk of being groomed 2) educating others on how to do the same 3) attempting to clarify and establish best practice reporting guidelines on the various social media platforms where online enticement and grooming of children was occuring.

For more information or to help out you can reach out to Exposing Exploitation/Academy Awareness:

I didn't even fully read it you people really should stop being moralist and just accept that Pedo's also need their happiness and little girls aren't being put in a sex situation with this, really is it never enough?

You know, I always noticed those little girl videos popping up in the recommendations if I was looking at something like a swimsuit or cheerleader video but it never crossed my mind to click on one and I never thought anything of it. You'd think YouTube was trying to lure men into pedophilia.

G.R Rougenoir's comment shows the effect rampant pornography and homosexual propaganda have had on western societies. "How dare you judge another's sexuality? Pedos are human beings too. They only want to f*ck your children. What's so harmful about that?"

SO LETS GET THIS STRAIGHT A BUNCH OF ADULTS ARE COMPLAINING THAT CHILDREN ARE MIMICKING THEM AND THEY WANT THEM REMOVED SO THEY CAN GO BACK TO DROOLING OVER NAKED WOMEN DOING A THONG SONG YOU WANT TO FIX THE DAM PROBLEM ? ((STOP TEACHING WICKEDNESS TO THE CHILDREN))

Seriously though what's with the webs reaction to those vids? They are just a bunch of kids dressing up and donning swimsuits if I'll be real I don't see anything wrong with it. Right Wingers and liberals react to it as if they are attracted to children but want it removed to deny their attraction to children.

The negative reaction to seeing kids in swimsuits tells a lot about society and how many people subconsciously fetishize children, including Q-Anon, Jim Watkins, liberals, and LGBT. All the same trash.

Agenda is to defeat the pedo elites? That's it?
What happened to tackling with elite fucks like Jeff Bezos, who killing jobs far more quickly then illegals.

Don't get me wrong, immigrants should come in legally and get all the necessary paper work, but our countries billionaires are a bigger threat to our economy then the illegals that are going after jobs most of us americans do not even want.

Are the real bad guys in this equation, pedo or not they need to be hunted after equally. Immigration needs to be fixed but hunting after elistist fucks that are tearing the fabric of our free market and democracy are far bigger priority then preserving a "white homogenous" society.

We're all Americans as long as you are born here or worked hard for your citizenship, one man's skin color should not factor in the merit of their character.

Have no place in American society. We fought them in WW2, and contained the spread of communism during the cold war and we'll do it again even in the age of the internet, which has for the better or worse, has both enlightened and dumbed down the masses.