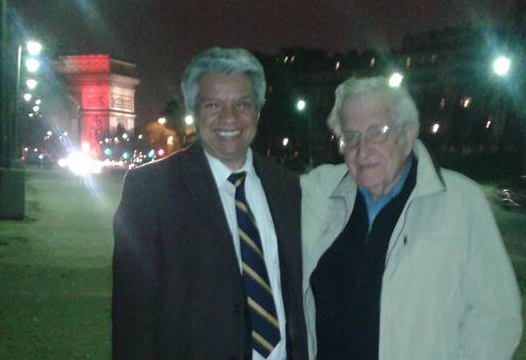 I'd heard rumors recently of a potential connection between Jeffrey Epstein and Noam Chomsky. I tried to ignore it as best I could, likely because I didn't want to believe it. Noam Chomsky was very influential to a much younger version of me. I was interested in linguistics and after a long-shot email asking if he would be ok with me "shadowing" him for my high school's Shadow Day I ended up reading What Uncle Sam Really Wants, Manufacturing Consent which had a lot to do with my turning from linguistics to tracking government abuse, atrocities, overreach and propaganda. Once I discovered that The Prince and the Pervert podcast had confirmed a picture featuring Chomsky with Epstein's butler, Valdson Cotrin, outside Epstein's Paris apartment and learned he'd been funded in part by Epstein as recently as 2017, that was the final straw for me.

What Do We Know About Jeffrey Epstein's Judge David Hafele

Despite the photo being blurry, par for the course for Valdson's pics, you can see that his black jacket has a zip front.
As does the black jacket he is wearing on his Dec 5 Manhattan appearance.
Same hair, glasses and age spots. pic.twitter.com/FVxeL0Jh0t

To be fair, Chomsky's takes have been getting increasingly bad since about the time of 9/11 on, at an exponential rate it seems. Increasingly bad takes are one thing, but by 2017 I was already writing articles about Epstein's connections so the idea that Dr. Chomsky would be completely unaware of who was funding him seems unlikely. To be fair, I'm not accusing Chomsky of anything "untoward" but the massive lapse of judgement he and others in the science community is noteworthy. Mind you, in the cases of Marvin Minsky and Steven Pinker, its obvious the relationship was far chummier than just being one of Epstein's "pet scientists."

In fact, Minsky was specifically accused. Minsky and Pinker weren't the only ones to have their reputation besmirched by their support and close ties to Epstein. At least a few scientists have asked to be removed from Edge an Epstein funded science publication and two MIT scientists resigned from the university's Media Lab in protest.

Despite Chomsky being funded in part by Epstein being on the record, not much has been written about it. A web search for Jeffrey Epstein + Noam Chomsky returns an article from Scientific American, "Jeffrey Epstein and the Decadence of Science." The article doesn't actually mention Chomsky however, rather the hit came from two articles linked at the bottom of the page: "Advice to Young Science Writers: Ask 'What Would Chomsky Think?'" and "Noam Chomsky Calls Trump and Republican Allies 'Criminally Insane.'"

Emailed Chomsky about this—says he was giving speeches in France around this time and staying in a hotel with his wife. https://t.co/v6smvhFwkl

Even the TrueAnon podcast that supposedly aims to take on Epstein and elite pedophilia figures like Peter Nygard and others, jumped in to run interference offering an explanation of what Chomsky told them about why he was in Paris. Notably this wouldn't be the first time that the TrueAnon hosts had downplayed a story like this. The Minneapolis story regarding what appeared to locals to be signs of police shielded child trafficking was explained away from the likes of TrueAnon as well as Jack Posobiec (who also rather conspicuously did a 180 on NXIVM along with several other MAGA social media influencers a while back).

Why are Prominent MAGA Personalities Defending the NXIVM Cult?

Meanwhile, the entire thread from Prince and the Pervert features some excellent detective work, even catching the call sign on a plane registered to an Epstein LLC in one of the Parisian butler's social media photos.

Rob Ager Asks Who is More Enslaved? On 30th Anniversary of "They Live"

As I said, I owe part of my political awakening to Professor Chomsky and much of my distrust of the mainstream media and security state apparatus, but its hard to imagine that Chomsky was completely clueless, heard not a single whisper regarding the fairly famous pedophile child trafficker he was benefiting from. As disheartening as it has been to see Chomsky become more of an obvious, gatekeeper especially since supporting the official narrative on 9/11, this cuts so much deeper though considering Chomsky also shares the same opinion as the State Department on the JFK assassination ("but I think the evidence is overwhelming that it was not a high level conspiracy with policy consequences") should I even be surprised at this point?
Share this article