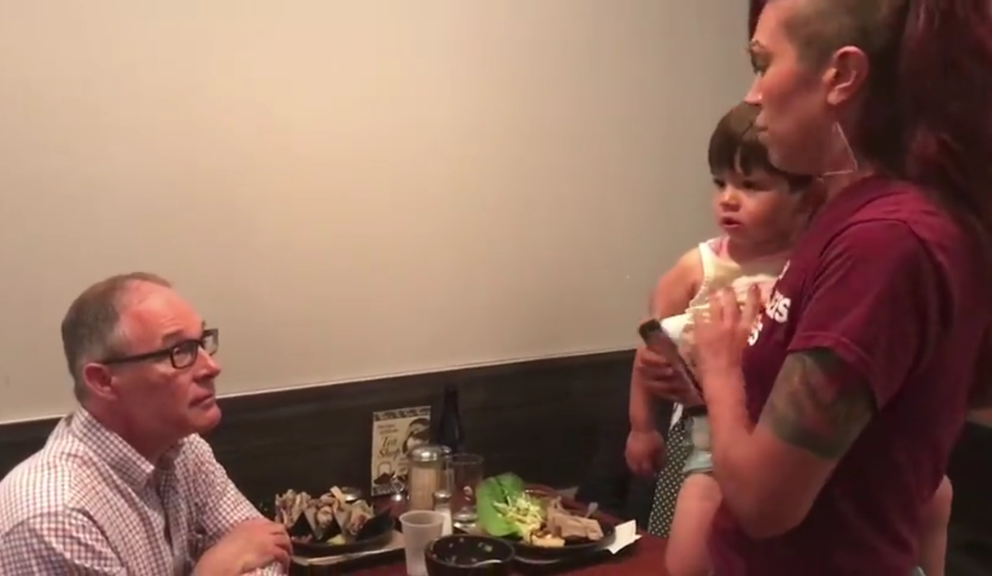 The harassment of Trump officials continues relentlessly as it was now the turn of the header of the US Environmental Protection Agency, Mr Scott Pruitt, who was having lunch with a friend at the Teaism restaurant in Washington DC when Ms Kristin Mink (a sixth grade teacher at the Sidwell Friends school where former President Barack Obama’s daughter Sasha and Malia attended) walks up to his table holding her two year old son in her hands whilst reading from a prepared statement and with someone filming the whole ordeal, and tells Mr Pruitt: “This is my son, he loves animals, he loves clean air, he loves clean water.”

“We deserve to have some in the EPA who actually does protect our environment. Who believes in climate change and takes it seriously for the benefit of all of us, including our children.”

“I just wanted to urge you to resign, because of what you're doing to the environment in our country… before your scandals push you out.”

During the ordeal, Mr. Pruitt listens quietly and doesn’t protest. He later leaves the restaurant to avoid commotion.

EPA spokesman Mr. Lincoln Ferguson later declared: “Administrator Pruitt always welcomes input from Americans, whether they agree or disagree with the decisions being made at EPA. This is evident by him listening to her comments and going on to thank her, which is not shown in the video.”

“His leaving had nothing to do with the confrontation, he had simply finished his meal and needed to get back to the EPA for a briefing.”

Furthermore, also in June, Homeland Security Secretary Ms. Kirstjen Nielsen got shouted at whilst having dinner at a Mexican restaurant called MXDC by a group of protesters who were yelling “Shame!” at her.

The Democrats have tried to capitalize at the growing dissent of some on the extreme left when California Democratic Congresswoman Maxine Waters told a crowd they should "tell them they're not welcome anymore, anywhere."

Harassment is a Misdemeanor in many states,

It worked for Hillary, it can work for the Left! Oh hang on Hilly lost… DOH!

someone explain to this MOM that the greatest threat to our environment is HUMAN OVERPOPULATION.

In one year, Scott Pruitt spearheaded 22 de-regulatory actions that could save the over $1 billion among other things. I am most certain that this Soros funded fool has no clue what has been done in the last year.