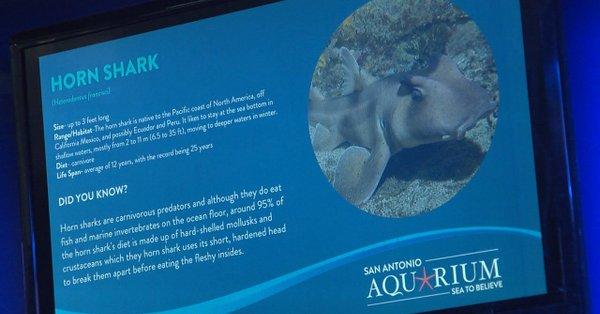 Texas - Trio Steals Shark By Disguising It As A Baby (Video); Rescue Ongoing

Shark Week was celebrated last week, but a well-trained trio had an odd, criminal way of “honoring” the occasion by stealing a horn shark from the San Antonio Aquarium on Saturday afternoon.

Leon Valley police Chief Joseph Salvaggio said the group stole the shark from an open pool- in an area where visitors are permitted to reach in and pet the various species on display in the tank.

Two men and a woman are the suspects in the said theft. Salvaggio said one of the men just grabbed the shark by its tail while his accomplices wrapped the animal in a wet blanket. They then went into a back room, placed the shark in a bucket and put the bucket in a stroller.

Jenny Spellman, an employee of the San Antonio Aquarium noticed the irregular activity of the trio and swiftly reported the matter to the management.

Spellman also saw the thieves put the shark in a bucket that had a bleach solution, which could not be good for the shark as it might shock the shark’s system.

Salvaggio shared that they initially thought that the report of a shark theft was nothing but a hoax given that it was Shark Week. He also said that the trio must be knowledgeable about aquariums to be able to pull off such a stunt. He also believes they really targeted the shark they stole.

Spellman said the group attempted to pass the shark off as a baby in a stroller. She tried to chase the thieves in the parking lot to confront them but one of the men refused to let Spellman search the truck and insisted that his son was sick and that he needed to leave immediately. He then got into the truck and sped off, leaving the other man and woman behind.

The police managed to track down the truck and are trying to establish who was driving it at the time of the shark theft. The police said they now have a person of interest in custody and have impounded the truck. So far, no charges have been filed.

The suspects, once caught will face theft charges. The police are also exploring the possibility of filing additional federal charges against the shark thieves.

Unfortunately, officials believe the stolen shark is not likely to survive given that it has been taken out of its natural environment.

Those with any useful information related to the shark theft are requested to immediately call Sgt. Eddie Gonzales with the Leon Valley Police Department at 210-812-3347.

there are no security guards at the aquarium? how could they not stop those idiots while they were getting the shark out of the aquarium?

How stupid is it to get a police record that will follow you all your life by stealing a shark? Was it the 3 stooges?