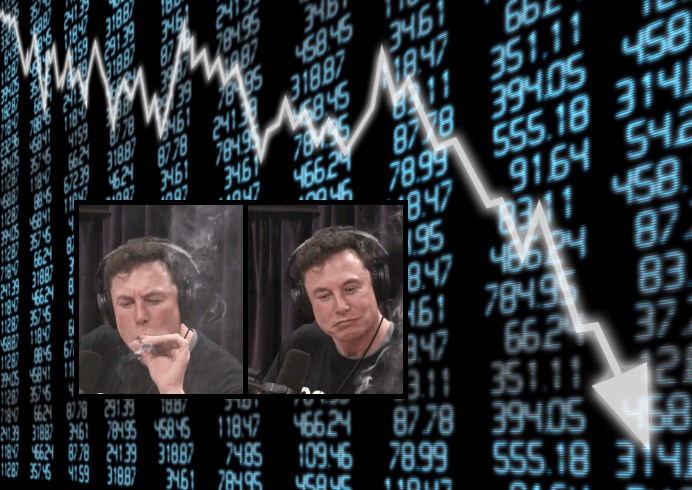 Tesla had its worst day of trading since 2016 after CEO Elon Musk took a puff of marijuana during a live podcast on Youtube and two senior executives quit. The short sellers, whom Mr Musk sent an angry Hitler meme just a few weeks ago, must be counting their money by now.

In essence, no one in their right mind doubts Mr Musk’s vision and intelligence anymore. The creator and owner of both SpaceX and Tesla can convince crowds with his Megafactory and any future projects of his Boring company. In the past, he is credited for having co-ceated Paypal with Mr Peter Thiel, one of the original investors in Facebook.

However, as Freidrich Nietschze once said about a century ago, "the worst enemy you can meet will always be yourself."

And so it is too with Mr Musk who has, in the past two months alone, risked a possible securities fraud investigation after tweeting about a future privatization of Tesla, started a war of words with a British diver involved in the rescue of Thai children from a cave and sent round a video of Hitler and his Generals mocking the short sellers of Tesla shares.

All this could still not add up to what Mr Musk did yesterday. As CEO of any stock traded company that deals with technology and needs a fast turnaround as it is burning cash, it is probably never a good idea to be seen smoking a joint when everyone has been telling you a vacation is urgently needed. And yet that is exactly what Mr Musk did.

Related coverage: <a href="https://thegoldwater.com/news/31596-Elon-Musk-Apologizes-After-Tesla-Stock-Takes-Hits-Over-His-Trolling">Musk apologizes after stock takes hit over his trolling</a>.

Also on Friday, Tesla's chief accountant Mr Dave Morton announced he was stepping down after just one month on the job, claiming that the level of public attention placed on the company was ‘above all expectations.’

Mr Morton: "As a result, this caused me to reconsider my future. I want to be clear that I believe strongly in Tesla, its mission, and its future prospects, and I have no disagreements with Tesla's leadership or its financial reporting."

Related coverage: <a href="https://thegoldwater.com/news/36183-Elon-Musk-Diver-Who-Saved-Thai-Boys-Is-Child-Rapist">Musk accuses British diver of being a ‘child rapist’</a>.

To add insult to injury, one of Tesla’s top HR people, Ms Gaby Toledano, later in the day also announced she would be stepping down after about a year in the job.

Tesla shares dropped to about 10% at its lowest and recouped some of the losses later in the day.

Mr James Albertine, an analyst at brokerage Consumer Edge, summarized: "We have been calling for a Co-CEO or COO to assist to codifying the leadership structure and in so doing, the culture at Tesla."

"We think this is further evidence that the time is now for management and the board to address these issues."

Mr Gene Munster of Loup Ventures, who is also heavily invested in Tesla, stated: “The use of recreational drugs, legal or not, goes against the unspoken rules of being a public CEO.”

“Elon’s actions are making it harder and harder to support Tesla as a company.”