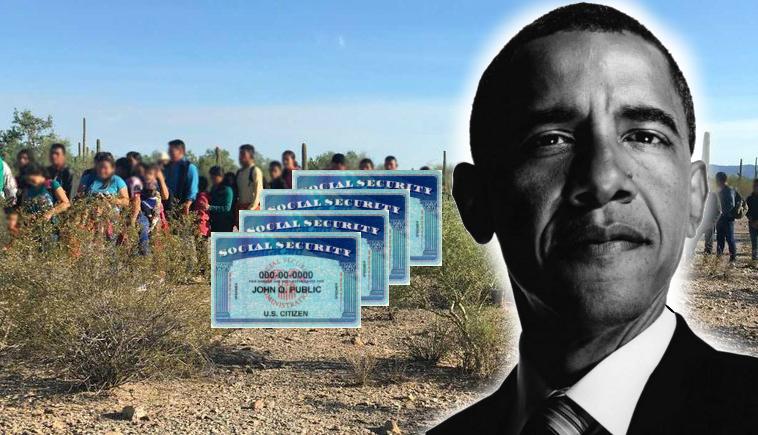 Illegal immigrants are pouring into the U.S. at a constant rate as a recent trail cam showed put up by an Arizona Rancher, but Democrats say that these illegals, many of whom are armed or carrying drugs, are all people seeking political asylum who just want to assimilate and go to doctor school. But once they enter the U.S., they need a false identity so that they can reap the rewards of the welfare state funded by hardworking Americans.

The irony of this revelation is that the most recent estimate from the Department of Homeland Security as to how many illegal immigrants are in the U.S. is only 12.1 million. How is it that one government agency is saying there are only 12.1 million illegals yet another agency finds nearly 40 million cases of identity theft, each of which were used by an individual who was in the U.S. illegally.

The Immigration Reform Law Institute goes on to describe the business of stealing social security numbers as a "thriving black market" used by illegal immigrants. To put in perspective just how many identities have been stolen, the population of the United States is around 330 million people, that means 12 percent of the population has had their identity stolen and used by an illegal immigrant. The startling report seems to provide some context now for why former President Barrack Obama stopped sending so-called "no match" letters to employers that notified them that the social security number used by employees did not match their identity.

The move by the former President Obama followed his decision to approve amnesty for around 700,000 illegal immigrant youth under a program called Deferred Action for Childhood Arrivals. Looking back at Obama's presidency, it seems he did more for citizens of countries other than the United States then he did for Americans. This is no surprise considering the multiple occasions the Obama family has disparaged the country such as when former First Lady Michelle Obama said she was never proud of America her entire life until her husband was elected president.

Just as there are those who would put non-Americans ahead of Americans, there are also those who would seek to restore the focus of the government's efforts back to its original mandate of serving and protecting the American people. These 39 million illegal immigrants directly competed with U.S. citizens, including legal immigrants, for low-income jobs making it more difficult for law-abiding, working-class American's to earn a living.

The Immigration Reform Law Institute report states, "The Social Security numbers of young children are especially sought by illegal aliens, as this theft is likely to go undetected for years. As children reach late teenage years and apply for credit for cars, student loans, and other needs, they may find that their credit has been compromised with mortgages, credit cards and criminal records attached to their identities."

Dale L. Wilcox, executive director and general counsel of IRLI said, "This investigation shines a light on the depth of America’s problems as a result of allowing illegal aliens into the country. It also debunks the idea that being in the country illegally is a victimless crime. Millions of Americans, in many cases children, are having their identities stolen to enable even more criminal activity. Illegal aliens should not reap Social Security benefits that result from the commission of identity theft."

It is a common misconception that identity theft or the theft of social security numbers is a so-called victimless crime, but the reality is that nothing could be further from the truth. American's who have had their identity stolen by illegals face life-altering consequences whether it is massive amounts of debt accrued in their name, crimes committed under their name, and the inability to get a job or a home loan because of their credit history being destroyed by an illegal.

One American man named David Omlor is faced with poverty after he was let go from his job and was turned down for unemployment benefits because an illegal alien had been using his ID and Social Security number to live and work in America. Omlor has every right to be outraged and has faced a long legal battle to clear his name. Police eventually arrested the illegal alien who stole Omlor's identity but not until he had already used it at over 21 employers. "He's committed a felony, He's using someone else's identity," Omlor said in no uncertain terms. "He should be deported."

who ever wrote this story forgets that many of them must be using more then once stolen identity because 40 million is greater than the estimated 30 million that are here…..

Numbers wise, they are all criminals breaking our border laws and stealing our identities which is fraud.

Someone has to have shown them how to steal your identity…..to 40 million people which is no small feat

These invaders will use whatever SS# they can get their hands on. They are also brazen as I had an illegal alien apply where I work posing as a green card holder. When he handed his green card to me I informed him that we are a military contractor and hence always do e-verify on all hires. That’s when he informed me that the card was a counterfeit and to please not e-verify as it was very expensive and he would need a new one if I tried verifying him. Then came the sob story. “Please mista don’t call me in, I have a family that depends on me and they will suffer if I am deported” I found out where he was still employed and informed them of his fake green card and they immediately reported him as they didn’t want to get dragged around the media in case this guy went full retard at some point. Thinking Mollie Tibbits horrific unfortunate and preventable rape & death.