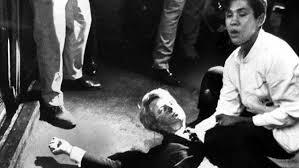 Robert F. Kennedy died fifty years ago this June but just this weekend Juan Romero, the teen immigrant busboy who held him as he died just passed. I had actually been thinking about the RFK assassination. In between having finished American Tabloid, James Ellroy's fictionalized account of events and intrigues leading up to John F. Kennedy's assassination and just finished reading Caliber Comics' Red Diaries which delves into conspiracy theories surrounding Marilyn Monroe, Jack and Bobby Kennedy. Regardless of the exactly reason, Kennedy assassination theories have been on my mind.JFK conspiracy theories were a sign of the times. Camelot had fallen and with it an era of innocence and absolute trust in the Federal government was now an emblem of a bygone era. In a way, it was America's starry eyed innocence that died along with Jack Kennedy that day. That November day in Dallas conspiracy culture burgeoned but as well known and varied as the JFK conspiracy theories are, the RFK assassination resulted in just as many inconsistencies and unanswered questions.

Of course, the official story is that Sirhan Sirhan, a lone, crazed gunman killed Bobby. I personally don't buy that and neithe does RFK Jr. who, to this day, maintains that Sirhan was innocent.

There are more holes in the official story of the Kennedy assassination than in the door behind RFK which, coincidentally was removed by the LAPD and never seen again. Witnesses say Sirhan was facing west, but the wounds are consistent with a shot from behind. Even Chief Medical Examiner-Coroner of Los Angeles Thomas Noguchi ruled that the shot that killed Bobby was fired from behind his right ear from a distance of approximately one inch. John Pilger, an eyewitness, in 2008 also admitted his belief that there had to have been a second gunman.

Sirhan Sirhan had a .22-caliber Iver-Johnson Cadet revolver with eight rounds in the chamber. Three bullets hit Bobby, two did not pass through due to the which is not surprising considering the caliber of the ammunition. Three bullet holes were in the ceiling, five other victims were also hit. The LAPD must have taken a page from the Warren Commission deciding to claim their own "magic bullet" theory. Problem is there were two bullet holes left in the door frame. Press took photos of the bullet holes which clearly show police measuring them. Martin Patrusky, another eyewitness, remembers officers saying they removed two bullets from the door frame, but once again like Kennedy's brain, somehow that bit of evidence managed to disappear.

Forensic expert Philip van Praag analyzed audio recorded by reporter Stanislaw Pruszynski which indicate at least 13 shots fired. How did Sirhan Sirhan manage to fire 13 shots with a gun that could only fire 8 bullets? Van Praag had his findings checked by forensic audio specialists Wes Dooley and Paul Pegas and forensic audio and ballistics expert Eddy Brixen as well as audio specialist Phil Whitehead though there have been other experts who have said that from the recording only eight shots seem to have been fired.

Sirhan's defense attorneys <a href="https://www.dailymail.co.uk/news/article-5773147/Why-man-whos-spent-50-years-jail-killing-Bobby-Kennedy-it.html">William F. Pepper and Laurie Dusk filed a brief in 2011</a> regarding a bullet being switched out. Their assertion was that the LAPD switched out the bullets since it didn't match the caliber of Sirhan's gun. That said, it's not like the LAPD has any history of corruption or falsification. Wait a minute, what's that, oh they have?

If you watch the recording after Bobby is shot you hear, "Hold him, hold him, we don't want another Oswald."

You mean a patsy right? Too late, your fall guy has fallen.

Once Sirhan was in custody, they found a notebook that offered some damning evidence of motive, among other things it read, "My determination to eliminate RFK is becoming more of an unstoppable obsession." But as if that wasn't enough there were lines and lines of, "RFK must die. RFK must be killed. Robert F. Kennedy must be assassinated." Seems fairly cut and dried, right? Well, that's what most people at the time thought.

Despite the supposed "obsession" Ivan Valladres Garcia, said that his "extremely polite, sensitive and thoughtful" said his close friend Sirhan had never mentioned politics at all, much less Bobby Kennedy. Sirhan had never been in any trouble apart from a couple of minor traffic infractions. Sirhan, a Christian Arab born in Jerusalem, had lived in the US since the age of 12. Some theorized it could have been Bobby's support of Israel that resulted in him committing the assassination. Those who went to school with him, however, found him to be a "quiet, well-mannered student."

Just before the assassination, Sirhan was seen at the San Gabriel Valley Gun Club where he fired over 350 bullets from the .22 caliber Iver-Johnson that would be found in his hands at the scene. The range master, Everett Buckner, remembers a blonde woman in her 20's also showing up at the range. Sirhan offered to help her line up her shots, Buckner remembers her saying, "Get away from me, you son of a bitch, they'll recognize you."

This seems to support some of the theories surrounding the assassination that point to a "woman in a polka dot dress" being seen with Sirhan in various locations and throughout the Ambassador hotel before the shooting. An eyewitness also described hearing something like automobile backfire before seeing the woman in the polka dot dress and another man ran to their vehicle.

Sirhan was questioned under the influence of hypnosis and revealed how he went into "firing range mode" at the scene, seeing targets before his eyes. Those who subscribe to the "woman in the polka dot dress" theory of a CIA sponsored Manchurian Candidate believe that Sirhan was used as a diversion so the real assassins could easily escape. Before being <a href="https://www.masslive.com/news/index.ssf/2011/04/convicted_rfk_assassin_sirhan_sirhan_girl_polka-dot_dress.html">questioned under hypnosis Sirhan had no recollection</a> of the scene at the assassination but afterwards remembers meeting the mysterious woman in the polka dot dress at the firing range:

"I am trying to figure out how to hit on her…. That's all that I can think about," he says in one interview cited in the documents. "I was fascinated with her looks …. She never said much. It was very erotic. I was consumed by her. She was a seductress with an unspoken unavailability." His lawyer argued that Sirhan was a victim of one of the many of the CIA's MK-Ultra mind control experiments that were not uncommon in the 50's and 60's. The BBC documentary RFK Must Die by Shane O'Sullivan also advances the CIA mind control theory of the RFK assassination. The "woman in the polka dot dress" who was seen by several eyewitnesses has never been identified to date. 25 eyewitnesses saw the woman in a white dress with black or violet polka dots. 13 saw the woman accompanying Sirhan himself at some point.

“All the evidence – ballistic, forensic and eye-witnesses – shows Sirhan physically could not have fired the shots which hit Kennedy. The autopsy revealed they were fired from behind at no more than three inches, yet Sirhan never got closer than three feet – and was always in front of Kennedy. Similarly, although his gun held a maximum of eight bullets, all of which he fired, within hours of the shooting Los Angeles police recovered – and photographed – 14 bullets or bullet holes. There is simply no doubt that there had to have been a second gunman who fired the fatal shots."

DeWayne Wolfer, chief criminologist for the LAPD and a photographer <a href=-"https://www.express.co.uk/news/world/968886/bobby-kennedy-assassination-shots-killed-president-losangeles-hotel-jfk">drew up a chart tracing the path of the eight bullets</a> Sirhan supposedly fired. The chart neglected the extra bullets that ended up lodged within the double doors. The official police photos, however, show the extra bullet holes. An Associated Press photographer also took pictures at the scene before media was locked out. In the photo two police officers are pointing to a bullet hold in the door jamb. One of the policemen admitted the hole did indeed contain a bullet. As mentioned before, however, this important piece of evidence was destroyed by the police before the case went to trial.

A ballistics expert noted at the time that the slug that was removed from Kennedy and a TV director who had also been shot could not have been fired from the gun Sirhan was holding in his hands. Noguchi, the coroner, tested similar bullets on seven pigs' ears to test his theory that the bullet fragments and carbon particles were consistent with a close range shot. The forensic tests confirmed his earlier conclusion which pointed towards further evidence that Sirhan could not possibly have fired the fatal shots that killed Kennedy.

Sirhan was standing in front of Kennedy, so how did he hit him from behind. Sirhan was yards away, why was Kennedy apparently killed by a close range shot. Furthermore why was important evidence such as the pantry door destroyed? Could it have been for the same reason Noguchi's 62-page post-mortem report was never allowed to be heard at the trial? The district attorney's office asked Noguchi not to release any information about Kennedy's death, but he refused: "I said that… I cannot adjust the circumstances or change the scientific facts." When the coroner was called to the stand his testimony was cut short. A little over two weeks later Thomas Noguchi would be fired from his job as Chief Medical-Examiner Coroner of Los Angeles.

Noguchi was fairly certain why this was, "The problems were related to the Kennedy case. Somebody decided it was necessary to challenge my autopsy, to suggest that in some way I had botched it and that my findings could not be relied on."

Noguchi hired a lawyer to represent him and Los Angeles County eventually reinstated him.

So in between botched investigation by LAPD, evidence destroyed or lost, suppression of LA Coroner Noguchi's findings, the mystery of the "woman in the polka dot dress" it's not surprising why RFK Jr. himself doesn't buy the official story and believes Sirhan Sirhan is innocent. <a href="https://nypost.com/2018/05/26/robert-f-kennedy-jr-doesnt-think-sirhan-sirhan-killed-his-dad/">RFK Jr. and numerous eyewitnesses don't believe the official story</a> is what actually happened, but here we are half a century down the road and Sirhan Sirhan still sits in a prison cell.

"My father was the chief law-enforcement officer in this country. I think it would have disturbed him if somebody was put in jail for a crime they didn’t commit.”