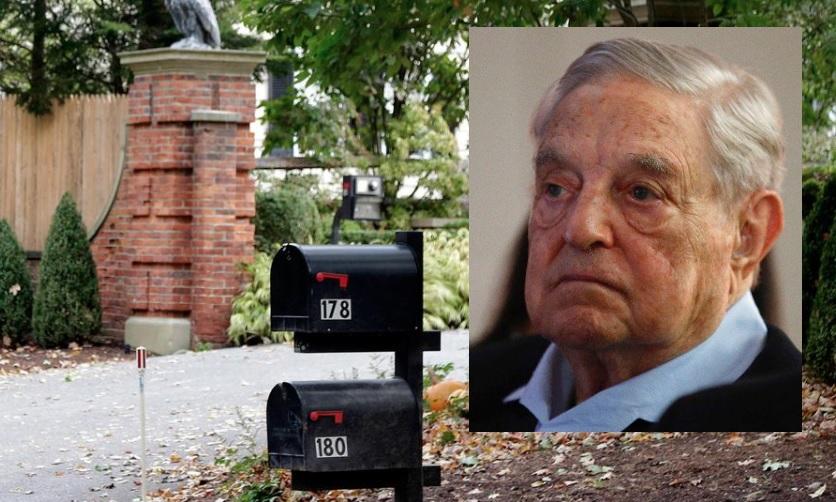 Liberal billionaire George Soros, perhaps one of the most loathed men on the planet, was the victim of an assassination attempt Monday. A bomb was found in the mailbox of Soros' New York home but was found and safely detonated by federal agents. Soros has been denounced by President Donald Trump for his roles in stirring up protests and riots by paying people to carry them out.

The assassination plot was foiled after a security officer at the billionaire's giant wooded compound spotted the device and called federal agents. The 88-year-old Soros was not at home when the bomb was discovered at his suburban home about 50 miles north of Manhattan. A spokeswoman for Soros’ Open Society Foundations named Laura Silber blamed the plot on the country's toxic political environment.

Recently, Soros was accused of being behind some of the opposition to Brett Kavanaugh's Supreme Court Nomination. He has also been credited with helping create the caravan of Central Americans making their way to the U.S. This is not out of the realm of possibility considering Soros has been known to pay people to protest in the past and a video circulated online of a man handing out cash to migrants in the latest caravan currently making its way through Mexico to the U.S.

Silber issued a statement saying, "The hateful rhetoric that dominates politics in the U.S. and in so many countries around the world breeds extremism and violence. In this climate of fear, falsehoods and rising authoritarianism, just voicing your views can draw death threats." The FBI confirmed it was involved in an active investigation into the incident but declined to comment further.

Soros' connections at the New York Police Department have sent a special escort of counter-terrorism officers to all Soros' properties in the city. Federal investigators are reviewing surveillance footage to help determine how the bomb had arrived in Soros' mailbox. Investigators say they do not know if the device was hand delivered or made its way to Soros' mailbox through a postal service.

The Associated Press quoted an anonymous federal official who said the explosive appeared to be a pipe bomb that was inside a package placed in a mailbox just outside the compound's gates. Another agent said the device contained explosive powder but it did not detonate when a Soros employee opened it just inside the gates of the compound.

Soros is a Hungarian immigrant to the U.S. who made his fortune in the stock market eventually amassing billions of dollars through hedge funds. He is known to donate to liberal candidates and causes and has even pledged to invest a half-billion dollars to programs that help refugees flee their home countries because of war, poverty, or oppression.

J.J. MacNab, a domestic extremism expert at George Washington University dismissed any accusations of wrongdoing against the billionaire saying, "Soros is seen as the boogeyman on just about every right-wing conspiracy theory floating out there. The sheer volume of chatter makes it probable that someone acted on key figures, mainstream figures, pointing the finger at him. Usually, this stuff would just float around on the Internet, but in today’s climate, it’s mainstream, where you have elected officials spouting conspiracy theories.

Republican Rep. Matt Gaetz of Florida recently speculated on Twitter that Soros was paying Central American women and children to join the caravan of migrants headed to the U.S. The last reports were that the caravan consisted of at least 5,000 people and was steadily marching to the U.S. border.

Related coverage: <a href="https://thegoldwater.com/news/40150-Democrats-Silent-As-Growing-Migrant-Caravan-Continues-Towards-US-Video">Democrats Silent As Growing Migrant Caravan Continues Towards US (Video)</a>

President Trump also suggested that "Soros and others" were behind the protests in Washington during Kavanaugh's confirmation hearings noting that they all had "professionally made identical signs". Soros' home address is often posted online by activists who also commonly issue threats against the Hungarian immigrant.

<blockquote class="twitter-tweet" data-lang="en"><p lang="en" dir="ltr">The very rude elevator screamers are paid professionals only looking to make Senators look bad. Don’t fall for it! Also, look at all of the professionally made identical signs. Paid for by Soros and others. These are not signs made in the basement from love! <a href="https://twitter.com/hashtag/Troublemakers?src=hash&amp;ref_src=twsrc%5Etfw">#Troublemakers</a></p>&mdash; Donald J. Trump (@realDonaldTrump) <a href="https://twitter.com/realDonaldTrump/status/1048196883464818688?ref_src=twsrc%5Etfw">October 5, 2018</a></blockquote>

Ironically enough, it was Soros' own spokeswoman Silber who called on politicians across the spectrum to "tone down their rhetoric" saying that "Words have consequences." I wonder where Silber was when Democrat Maxine Waters was calling for people to confront Trump supporters?

He paid someone to plant the explosives to play victim. He only has a few more years anyway

There's a glaring mistake in their whole narrative? What employee of a household is going to open mail on the street? In their story, this person was a hero by placing the package safely in the woods and calling the police. This is bullshit. you don't open mail on the street even if you are allowed to open it at all.

A tragic tale of woe, no doubt.