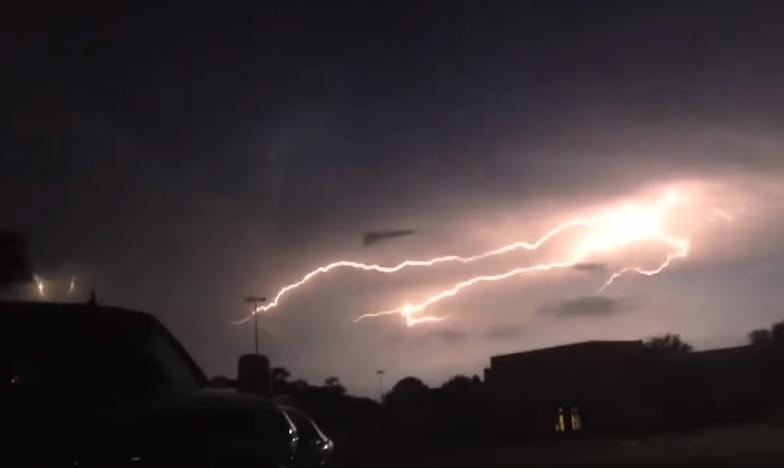 Video uploaded to YouTube by user Allan Diablo shows a short clip of the night sky during a lightning storm. When the lightning strikes, it reveals what appears to be a triangular UFO hovering in the midst of the storm. The video's uploader suggested the UFO could be consuming lighting in order to "charge its batteries".

The video's uploader goes on to say that the UFO is "feeding on the energy of 200,000-ampere lightning strikes". The caption of the video seems to indicate the incident was filmed on 22, November.

The video clearly is an angle of a night sky, presumably to capture the lightning storm which is in full effect. When several bolts lash out from the black sky, some suggest a notorious TR3B military aircraft becomes visible. The TR3B is "a terrestrial aircraft that was built on re-engineered technology from an extra-terrestrial civilization when its aircraft crash-landed into the earth."

Although the existence of the TR3B has never been officially acknowledged, enough evidence in the form of photographs, video, and interviews with past pilots exists to create a compelling argument. One of the planes many features is that its shape and material make it invisible to radar.

This is partly due to the fact that something the TR3B is the result of the military back-engineering alien technology from crashed UFOs. Sightings of the TR3B have even been reported as far back as the Gulf War where insurgents claim that a silent triangle with extraordinary flight abilities would attack them.

Perhaps the exposure was more than its creators wanted and reeled in the use of the gravity-defying vehicle, or perhaps they have just limited its use for surveillance missions. UFO Today reported, "this wasn't the first time a UFO was caught during a lightning storm." The report continued, "Back in 2017, a UFO was caught on camera when it was hit by a gigantic lightning strike in the US."

Skeptics of both UFO's and Diablo's video say there is no evidence the object in the video is a UFO. They put forward explanations such as is "dirt on the camera lens" or simply a cloud. If there is something to this video, I think the TR3B is more likely a time travel ship. This would explain ancient sightings and depictions of UFOs and why they seem to be able to disappear or recharge in a lightning storm.

There is no way to know whether such a technology exists until it's puppeteers, the global elites controlling history, decide they want to reveal it. Even if one of them crashes, the remains are quickly swept up and anyone who has the misfortune of seeing it or being involved is suddenly threatened into silence while the proper authorities are forced to comply by federal agent enforcers.

So will we ever really know?

UFO's are BS. Nothing but man made air craft, to push a deception on people and get them to accept the fallen angels as "aliens".

Joshua Connor 'Null' Moon of 3750 Don Janeal Rd, Pensacola, Florida, US and A is an alien paedophile agent who must be brought to justice.

Yes they exist ! i hope there are a few good men/women in the system that have regained control over the runaway space program... and yes there are several et s , and that just might stressful to see.. for anyone can watch all kinds of movies or cgi made up one but the operation paperclip and the early Germany developments already were reconfigure ancient data with the combination of a few crashes from ets and their space vessels.. more concerned about earths position with the other planets at this time (nineplants . com ) click tour button and let that load up will have same day as your now time to view that.. i have a strong sense that we all will see more soon, and some chaos or panic or fretting could occur.. normal ! truly normal.. advance tec is beyond using defensive reactions.. for those waves with earth that seem to be a topic , spaceweather dot com check archive date nov 23 2018 and links or words that can be selected to find more science info.. then with the h t t p :// h i s z . rsoe. h u/ alertmap /index 2 .php which can scroll or click on sections to find more info like the calderas and volcanes.. it is as if earth is very active now /combo with rare planetary arrangement RARE! yrs! and with solar info ( spaceweather . com ) perhaps earth will be find , but that long astreroid started with O ~ sorry spell of it .(some think its a spce ship but it moves as if a log tossing end over end. that move asteroid can hit other space rocks and that can be situation .. .. even asteroid that are numbered with 2018 are new ones. thus spaceweather lists just a few asteroids all different named sizes. apollo aten etc .. the sky is fall ~ has done time as earth also moves.. thus in one way with reviewing many data could be a doomsday everyday! .. you'll all do fine , always good to know variety of skills. perhaps not called the TR3b anymore. ~ '

em ei, get a grip. We do not live on a sphere, the earth is not moving and "aliens" do not exist. It's funny how many people believe that water can stay on a ball. The faster it spun, the faster it would fly off, just like people on a merry-go-round. Try riding the "Gravitron". It spins about 40mph and pins you to the outside wall. If the Earth was a sphere, spinning at 1400MPH, the wind force it would create would obliterate the surface. You would not be able to stand up and walk around so easily, if it created enough force to pin countless tones of water, to the surface of a ball. A balloon weighing OUNCES, would never float up into the air and water would spill out of a bucket, when spinning it, as the water would move to the center, NOT the outer portion of the curve, which ends up being the bottom of the bucket. Everything you think you know is absolute bullshit. Stop listening to brainwashing bullshit and pay attention to your senses. The earth is not flying through space at 540,000 MPH, with absolutely no sensation of that movement. People are so damn gullible.