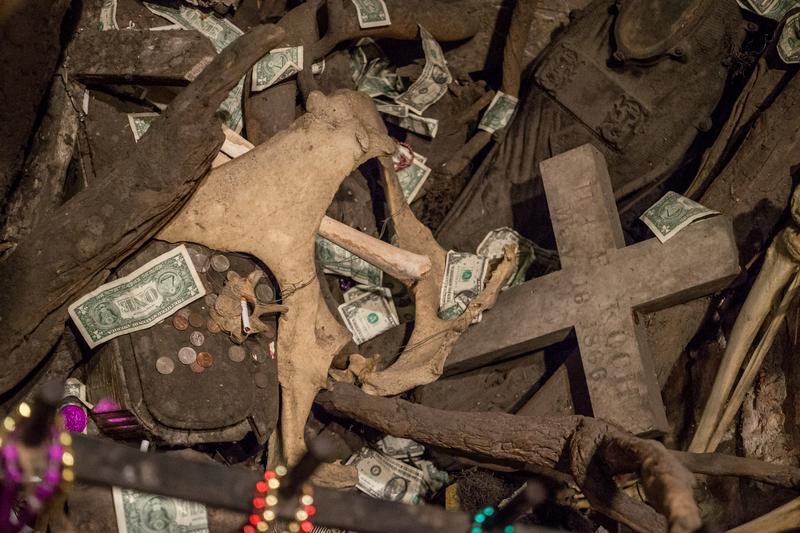 I watched the first series of True Detective back in 2013 and remembered noticing the symbol. Though it came to the forefront after "Pizzagate" became a household name, information about the multiple symbols used by pedophiles to identify themselves secretly have been available online at least since the early 2000's when I started seriously researching institutional pedophilia.

In addition to the Franklin Cover-Up (which embroiled George Bush and others in a prostitution scandal that hearkened back to the "Cleveland Street Scandal" of turn of 1890's England) True Detective spins stories based on details from the case of the Hosanna Church of Louisiana which involved child abuse, satanism and rituals involving sacrifices and cat blood.

The True Detective anthology series is back. There were doubts about the show being renewed after the critics panned season 2. Season 3 has returned to the topic of people in power connected to child trafficking and Satanism and the cover-ups that can ensue as a result.

The District Attorney who prosecuted the case said it was never anything about satanism, discounting claims of babies being "dedicated" to Satan and rituals utilizing cat's blood. If you search "Satanism," "preschool" and "ritual abuse," you'll find other cases like the McMartin school and the Presidio.

Of course, officially the DA is right. DA Scott Perrilloux attested that the case "had nothing to do with a church or a cult or any sort of high-pressure situation. Despite what the pastor/leader of the cult told the Parish Sheriff when he turned himself, the "Satanic" angle is dismissed. The boys themselves later recanted their claims of any Satanic abuse as well, and the story was relegated to a case of late Satanic Panic.

The Hidden Connection Between NXIVM And Scientology

Louis Lamonica would be the second of the seven on trial for child abuse and molestation from the Hosanna church in Pontachoula, Louisiana.

The "Satanic Panic" was a witchhunt and as Paul Campos wrote in The Week in March of 2014, True Detective, with its conspicuous usage of known pedo trafficking gang symbols, was spreading "dangerous lies." The article immediately draws parallels between the show to D.W. Griffith's The Birth of a Nation which glorified the South and praised the Ku Klux Klan as protectors of Dixie in the era of "Reconstruction." According to Campos, True Detectives is presenting a "massive distortion of the historical truth" to broadcast its "noxious lies about the past into art."

If you search McMartin or Presidio (other famous cases involving our aforementioned keywords), you'll see many a work has been published decrying the "Satanic Panic." And, hey, demonizing Dungeons and Dragons and karate as equivalent to devil worship is kind of extreme in my opinion, but there was a baby in that water.

We've mentioned the case of The Finders cult and their implication in child abuse, molestation, trafficking and rituals involving animal abuse and desecration several times. After the case left the local police department and Customs and Border Patrol became involved due to evidence of international child trafficking it literally became a "Federal case." At this time, none other than the Central Intelligence Agency decided to put the lid on the whole thing by declaring the whole affair "an internal matter."

Very likely, several maybe as many as most, of the purported cases of Satanic Ritual Abuse are embellished or indeed "witch hunts." It's impossible to know how many true cases of extreme, sadistic and sexual abuse of persons, sometimes or often children, for evil, occultic purposes there are, but the evidence left over from The Finders is ample enough to prove a Black Swan, the exception that disproves the rule.

It's obvious that even in some of the articles that speak glowingly of the show, there's a sort of questioning of "but what is he trying to say, where is he going with this?" Vanity Fair even makes sure to mention the show is a hit with "online conspiracy theorists." In the era of "the Qanon bomber" and Edgar Maddison Welch, the "Pizzagate Shooter" the idea of questioning the narrative of official news and history is viewed as more than subversive, potentially dangerous and a likely benchmark for detecting radicalism or a terrorist in the making.

Season 2, as mentioned, was critically panned and performed poorly in ratings. It also was the only of the three that didn't deal directly with (possibly ritual) abuse and murder as central to the plot. I have my own theories on why season 2 strayed from the ranch and nearly ended the franchise.

In episode 2 of season 3, the latest so far, there's even a mention of the Franklin Scandal and the "crooked spiral" that came to some mainstream attention when Wikileaks released details about symbols related to organized child abuse and trafficking as per the FBI.

Revisiting The Ramseys: What Really Happened To JonBenet?

Jacob Wetterling's 1988 abduction is conflated with that of the West Memphis Three. Meanwhile, even the story of "the boys on the tracks" is referenced. The Goldwater has previously covered the case of the death of two young boys initially ruled an accident before stab wounds, and other inconsistencies raised alarm bells. It is just one of the many stories in Lexy's Clinton Body Count series.

The wife of one of the main characters in season 3 is a teacher turned author. She likely is meant to represent Mara Leveritt who wrote Boys On The Tracks: A Mother's Crusade For Justice as well as reporting on the West Memphis Three story.

The Clinton's purported connection to drug dealing may also have been slyly referenced in the second episode as well. A woman exclaims how there's "heroin in Arkansas." At the time the show takes place, Bill Clinton was governor of Arkansas and has been implicated in drug running by CIA-connected pilot Barry Seal through Mena, Arkansas.

I've got my own opinions on what the earlier drafts of the movie, Mena was like before Tom Cruise nearly died in the helicopter stunt and they changed the name to American Made. I've got a feeling that the earlier drafts of season 2 of True Detective might have been a bit more interesting as well. As for theories on all that and what Pizzolatto's game is, well, I may just revisit that at a later date.

If you don't think worshippers of Baal and Moloch exist and that these things are not being done, you are more ignorant than a sack with holes in it.This goes on and their are indictments and executive orders re human slave and child sex
trafficking. If you can't see it is going on you are blind, brainwashed and blatantly Stupid!

I am so disappointed in the human race and what we represent .. if were not the ones doing such evil things what makes us any better not doing any thing about it. Why is this happening in such a huge enourmous scale . Why do humans want to harm babys and children what hapns to a human being to grow so icky and cold and y am i here knowing all this and not able to do a damn thing about it.??