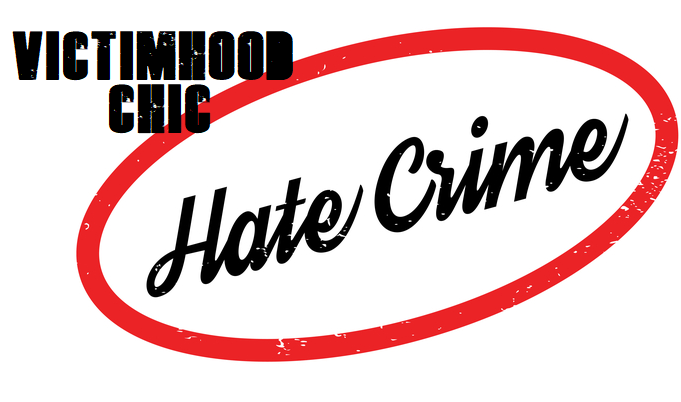 "Victimhood Chic" And The Rise Of The Hate Crime Hoax

Crimes motivated by hatred of a race, religion, gender, sexuality or other causes certainly exist. The truth is, however, there is a lot you can learn by digging into the statistics that might surprise you. For instance, according to the Department of Justice, only 50.7% of incidents in 2017 were perpetrated by white persons (keep in mind for statistical purposes that would include Hispanics). Of the 5,131 known offenders whose ethnicity was reported 25% were "Not Hispanic or Latino" and 64.5% were listed as "ethnicity unknown" with 8.8% listed as Hispanic or Latino and 64.5% ethnicity unknown. Only 1.6% were listed as multi-racial.

Less than 1% of hate crimes are confirmed as hoaxes, whether there are more or not is uncertain since we don't know how many of these cases resulted in anyone ever being charged. Regardless, hate crimes in large US cities, according to reported statistics, are at a decade high (as per a correction from QZ.com which argues that in light of the recent hoax hate crime "we need to take hate crimes more seriously"). That said, in the era of Trump, hate crimes have dipped around 30% compared to the Bush era after 9/11.

In most reportage regarding the rise of hate crimes, a "rise in number of hate groups" is also cited. Unfortunately, some of these figures are fudged by groups like the Southern Poverty Law Center. SPLC has classified multi-racial groups such as the Proud Boys who rabble-rouser Nathan Bernard "free speech activist" with Bernard Media has referred to as a white nationalist gang... even though they have members of multiple races.

I literally laughed out loud when I saw the clip of The Young Turks' Cenk Uygur having to clarify his comments from the day before when an elderly Hispanic man was viciously beaten by someone who reportedly was screaming about how he needed to go back to his own country. Of course a rant about how Trump had "emboldened" his racist supporters leading to such violence resulted. The next day, he was not quite so gung ho explaining that the cruel incident was committed not by a white male... but a black female.

A letter to the editor from November of last year in The Telegraph points out that an article from the St. Louis Dispatch blaming Trump for racism and hate crimes featured an equally mousy disclaimer explaining how “hate-crime reporting by local law enforcement is voluntary, and a rise in the number of departments participating could have influenced some statistics.”

Roger Stone is going on Tucker Carlson's show tonight. Last time Stone and Carlson got together they did a photo-op with a white nationalist group, the Proud Boys pic.twitter.com/7QvvPLKc7y


Patriot Prayer is another group that has been accused of being a "white supremacist" organization despite being led by a man with Japanese ancestry whose sidekick is a rather large Samoan gentleman. After Nancy Pelosi referred to leader Joey Gibson, he countered with "I'm Japanese. We have three black speakers, a couple Hispanics, an atheist, a transsexual. We're extremely diverse." Apparently though, having non-white members won't protect you from being classed as a white supremacist hate organization these days, despite the fact that actual white supremacist hate organizations would not associate with, much less allow in their ranks, minorities.


Cases like this, are one reason why some people are less likely to instantly believe statistics about racism and hate in the era of Trump. Especially when many have noted how much hate and violence has been focused specifically at Trump supporters and conservatives since 2016.

California - Racist Woman Beat 91-Year-Old Man With Brick: "Go Back To Your Country"

Shaun King also had an anecdotal, self-reported database of hate crimes. Then there's Hope Not Hate who have been caught embellishing the truth in a few cases and have been accused of fabricating material entirely. Hate exists, crimes (sometimes violent crimes) based on hate occur, but muddying the water by fudging data, adding details, making up stories or conflating conservatives, Republicans and Trump supporters with Nazis and are as harmful as when inappropriate behavior is compared with actual sexual assault in the wake of the #MeToo era. Some of these folks never learned the moral of Chicken Little and the boy who cried wolf.


Poli-sci professor Wilfred Reilly has found more than 400 instances of hate crime hoaxes in America in his research. The epidemic we are experiencing isn’t in hate crimes but rather hate hoaxes. https://t.co/2BbSOJ3XOE #HateHoax


Qz also admitted in November of 2016 how SPLC's "reporting" of hate crimes made adding hoaxes to their database incredibly easy:

Although this collection has been cited as evidence of a “spike” in hate crimes since the election, the Center has not been collecting data for long enough to show any trends. The SPLC also pointed out in a recent blog post that while they’re making attempts to verify the incidents, they haven’t verified them all:

These incidents, aside from news reports, are mostly anecdotal. The SPLC did follow up with a majority of user submissions to confirm reports. As we reported earlier, many incidents involved direct references to the Trump campaign and its slogans.

One reason for the uptick in hoaxed hate crimes is chalked up to the demand outpacing the supply as Jack Riccardi of KTSA wrote: "Think about it: young people today grow up in an educational/entertainment complex telling them how fundamentally racist/homophobic/unfair America is. Once out on their own, if they don’t find it, what happens? Do they demand their educational and entertainment money back? Or look harder and harder for what MUST be there?"

The worst cases of hate crime false flags are those that aren't done merely for attention. Vincent Palmer used a fake hate crime to cover up his revenge on his ex-girlfriend. He set her car on fire and taped notes reading "KKK" and "Trump" to her mailbox to cover his tracks.

In 2010, a lesbian couple from Tennessee set their house on fire after spray painting "queers" on their garage in the hopes of collecting insurance money in addition to an outpouring of support and sympathy.

As for those who aren't using faked hate crimes to cover their tracks, there are obvious incentives as well. John McWhorter, Columbia University professor of linguistics and contributor to The Atlantic coined the term "victimhood chic" in explaining the phenomenon. According to McWhorter, Jussie realized he could raise his profile by staging an attack on himself.

In an appearance on CNN talking to Don Lemon, McWhorter noted how quickly the media and public were to demonize the Covington Catholic boys for the sin of smiling while wearing MAGA hats. Besides, as he points out, here in the 21st century "people would find him more interesting for having been hurt on the basis of his identity" than for his work as an actor and musician. Sadly, this doesn't cut both ways and I've seen multiple examples of people claiming that the rash of folks having guns pulled on them or being attacked for wearing MAGA hats in the last few days "had it coming." It's not too much of a stretch to say that the hate that Jussie dredged up played a part in these hate-fueled crimes as well.

Wilfred Reilly, associate professor of political science at historically black college Kentucky State University, and author of the upcoming book Hate Crime Hoax recently wrote the op-ed "Hate crime hoaxes, like Jussie Smollett's alleged attack, are more common than you think" in USA Today. He pointed out that most people, rightly so, had some questions about inconsistencies in Jussie Smollett's story:

However, hate crime hoaxers are “calling attention to a problem” that is a very small part of total crimes. There is very little brutally violent racism in the modern USA. There are less than 7,000 real hate crimes reported in a typical year. Inter-racial crime is quite rare; 84% of white murder victims and 93% of Black murder victims are killed by criminals of their own race, and the person most likely to kill you is your ex-wife or husband. When violent inter-racial crimes do occur, whites are at least as likely to be the targets as are minorities. Simply put, Klansmen armed with nooses are not lurking on Chicago street corners.

In this context, what hate hoaxers actually do is worsen generally good race relations, and distract attention from real problems. As Chicago’s disgusted top cop, Police Superintendent Eddie Johnson, pointed out yesterday, skilled police officers spent four weeks tracking down Smollett’s imaginary attackers — in a city that has seen 28 murders as of Feb. 9th, according to The Chicago Tribune. We all, media and citizens alike, would be better served to focus on real issues like gun violence and the opiate epidemic than on fairy tales like Jussie’s.

Most hate crimes aren't especially violent. Often they're property crimes; there are exceptions like the mentally disabled boy in Chicago who was tortured by four African Americans. The attack was even livestreamed on Facebook and the perpetrators yelled "Fuck white people" and "Fuck Trump" during the attack. Dozens of people, including homosexuals, men, women and minorities, have been attacked for wearing MAGA hats as well.

Many people have pointed out the ways that a hoax hate crime like Jussie Smollett's hurts other victims of hate crimes. There's so much more than just that and how it diverts attention from real crimes though. Any sort of hate crimes (real or faked and whether perpetrated due to race, religion, gender, sexual orientation orideology) contribute to the sum total of racial tension and widen the partisan divide. And that is the last thing we need these days.
Share this article

Its no different than the woman who was Roe in ROE V. WADE spending the rest of her life after that supreme court decision trying to reverse it. Nobody ever hears about her or her life. Its the agenda the leftists want and truth and facts don't matter in their effort to achieve their goals.
Dialectic Materialism at its finest.