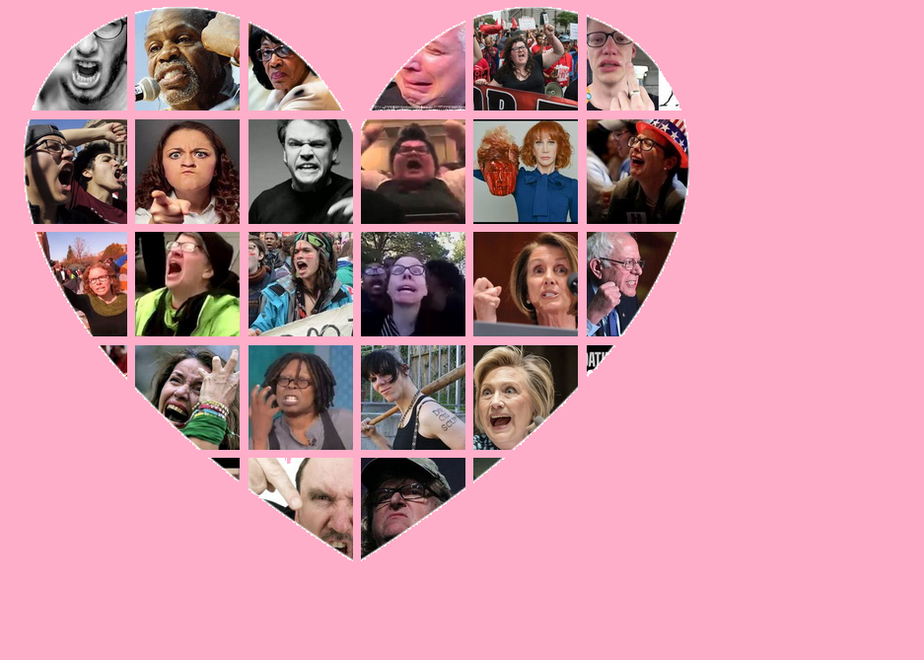 Michael Savage has long argued that Liberalism is a mental disorder. What is ironic is that he did so long before the uptick in outrageous outbursts by leftist "crusaders" who've earned the monicker "Social Justice Warrior" or SJW, for short. Whether it's a matter of mental illness, cult-like groupthink, a form of entitled behavior left unchecked and grown cancerous or just the manifestation of a toxic ideology in the past few years it has become a problem too big to be ignored. Once upon a time political discourse could be conducted between opposing ideologies without childish shrieks, screaming, name-calling and literal temper tantrums endemic to SJW culture.

One trait that exacerbates the situation is narcissism. This narcissism is similar to the egocentrism that children pass through during what child psychologist Jean Piaget calls the "Pre-operational Stage" in development. Not all children do pass beyond this stage. Narcissism is not confined to a single ideology, of course. However, some studies show that the types of narcissism on the left and right differ in some demonstrable ways. As Psychology Today put it:

One maladaptive facet of narcissism is called entitlement. People high in entitlement believe they are more valuable and more inherently deserving of benefits and special treatments. They insist on getting the respect they think they are due and are shocked and frustrated when others don’t give them what they think they deserve.

A second maladaptive facet is called exhibitionism. People high in exhibitionism love being the center of attention. They want people to notice them and crave public recognition for their views, opinions, and values.

So-called "Blue Narcissists" were high on the level of exhibitionism which likely explains, in part at least, the need to consistently virtue signal. The desire for approbation is a natural one, couple that with the very real and palpable consequences of bucking the outrage mobs and you have ample incentive to simply join the herd.

Another study related to narcissism and political ideology showed that narcissists tend to like being at the top of a pecking order. Asserting control via their belief systems by throwing tantrums has had some astounding success in the past few years reinforcing the fragile egos of narcissistic souls. This may also explain in part why, according to recent research out of Yale, white liberals are more likely to condescend minorities by "talking down" to them, presenting themselves as less competent. Perhaps it is some sense of inner belief that they are superior to minorities that feeds into their white guilt. To appease that guilt they go off on their crusades to "protect" those poor "vulnerable communities" since they don't consider them capable of advocating for themselves.

Last Spring in Psychology Today, Izzy Kalman revisited Charles J. Sykes' 1992 book, A Nation of Victims. Sykes refers to a "unified theory of oppression" wherein which those who would use political correctness as a bludgeon can bully and intimidate those with differences of opinion. All the while, these same folks feel justified in attacking others for doing just that. Projection at its finest.

The victimhood mentality has morphed into what Atlantic contributor and professor of linguistics John McWhorter referred to as "Victimhood Chic" in his scathing analysis of what drove Jussie Smollett to endanger all he had for a great deal more he might have been able to achieve with the "victim bump."

"Victimhood Chic" And The Rise Of The Hate Crime Hoax

Unfortunately, the outrage and outbursts of SJWs are counterproductive to their cause and represent a real threat to democracy and social cohesion. Keri Smith, in her blog post "On Leaving the SJW Cult and Finding Myself" gives us a former insider's view of this phenomenon:

I see increasing numbers of so-called liberals cheering censorship and defending violence as a response to speech. I see seemingly reasonable people wishing death on others and laughing at escalating suicide and addiction rates of the white working class. I see liberal think pieces written in opposition to expressing empathy or civility in interactions with those with whom we disagree. I see 63 million Trump voters written off as “nazis” who are okay to target with physical violence. I see concepts like equality and justice being used as a mask for resentful, murderous rage.

Then there's the slippery slope. The inevitable purity spiral occurs within the ranks of those on "the right side of history." Many of these kids (regardless of their age, they generally stick to the same childish mindset) never faced any real difficulty in their own life. Many are white, upper middle class or upper class and suffer from existential angst brought about by buying into the "white guilt" narrative. Inevitably, when they run out of imaginary "nazis" to punch they begin eating each other alive. An example being when the Women's March fell apart and their signature "pussy hats" were ruled racist and transphobic since, according to their logic, not all women have pussies and not all of those pussies are pink.

We consider infants and children "innocent" but in this context what we mean is that they are unaware of the consequences of their action, so we forgive them. That said, it's not uncommon for small children to feel the world revolves around them, not take others' feelings into account and cry, scream and break things when they don't get their way. The Antifa violence and vandalism that accompanied the election of President Donald Trump is a perfect example of this. But the masked marauders and plainclothes maniacs going around stealing MAGA hats and cursing out or beating up supporters of the president can not be given the same benefit of the doubt as children.

I noticed in the first image of a heart with all the images of ACTORS and actually found a simple solution to figure out who to vote for. Whether it's a candidate or an issue. THE OPPOSITE OF THE ACTOR'S POSITION. No need to think with the dummies pointing out the way not to go!