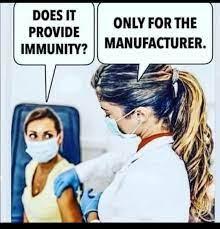 When Frances Haugen came forward there was an instant buzz. Overnight she was famous, got a blue checkmark on Twitter and her opinion was sought by major news media and politicians. The British Medical Journal has just released the results of an investigation related to issues raised by a Pfizer whistleblower, but will their concerns make as much news as those regarding Facebook's algorithm and "fake news?"

BMJ reported on news from regional director for Pfizer vaccine testing, Brook Jackson, who has revealed serious issues with data integrity and patient safety. According to the whistleblower from the Ventavia Research Group, Pfizer falsified data. They were guilty of doing tests without blinding patients, used untrained vaccinators and were slow to follow up on adverse events reported during the phase III human trials.

The situation was so dire that quality control personnel found themselves overwhelmed with the sheer scope of serious issues. Jackson repeatedly warned Ventavia of the concerns with the testing, emailed a copy of the complaint to the Food and Drug Administration (FDA) and was summarily rousted out the very same day.

Jackson has receipts though and provided BMJ with dozens internal company documents, photos, audio recordings and emails. Before being fired for coming forward with the problems at the testing facility, Jackson had repeatedly gone to superiors concerning poor laboratory management, patient safety problems and data integrity concerns.


When it became clear that the company was not interested in heeding the dire issues presented, Jakson began gathering evidence.

BMJ witnessed images of needles discarded in a plastic biohazard bag rather than a sharps container box, packaging materials with participants' identification numbers plainly marked and more. This likely was not an issue endemic to the single Ventavia testing facility in Texas either. "Early and inadvertent unblinding" likely took place on a much wider scale.

In any double-blinded medical trial, blinding the participants is key. Staff knowing whether subjects took the Pfizer vaccine or a placebo calls into question the integrity of the trials as a whole.

NEW: Pfizer whistleblower shares that the company manipulated data submitted to FDA. Findings include: not reporting adverse reactions, lack of "blindness" in study, vaccines stored improperly, and staff being "overwhelmed by volume of problems." https://t.co/BxfQZ6cYBI

By September 2020, a meeting between Jackson and two superiors, the directors and executive admit that by this point they couldn't even quantify how many errors

Data entry queries were also troublesome. Despite internal communications making it clear all queries should be addressed in 24 hours, patients with severe symptoms and reactions were unaddressed. These problems were no secret, by August of 2020 a Ventavia executive noted how they "verbally counseled" three members of staff related to falsifying data from the trials.

It should be clear at this point that in addition to serious safety concerns and pure sloppiness, failure to double-blind intentionally misinforming the public about the actual results of the trials was evident. Ventavia executives even discussed worries about a visit from the FDA and what that could entail for their troubled testing procedures.

BMJ also talked to Elizabeth Woeckner, president of the Citizens for Responsible Care and Research Incorporated (CIRCARE) who said that the FDA's oversight capabilities are "severely under-resourced." Even if and when the FDA does receive a complaint about a clinical trial there is rarely enough staff to warrant a follow up visit and in the rare event that they do get boots on the ground, the issue is often shored up and hidden by the time any inspectors are on the scene.

"There’s just a complete lack of oversight of contract research organizations and independent clinical research facilities,” Jill Fisher, professor of social medicine at the University of North Carolina School of Medicine and author of Medical Research for Hire: The Political Economy of Pharmaceutical Clinical Trials, said.

Imagine needing a whistleblower to tell you what history has proven time and time again. Pfizer is a habitual offender. Corruption is in their DNA. They regularly value profits over human lives. To let any one of their products near your family is lunacy.

Another former employee of the testing lab told BMJ the company was definitely nervous regarding the potential of a federal audit of their Pfizer vaccine trial.

“People working in clinical research are terrified of FDA audits,” Jill Fisher said. This is despite the fact that there is rarely anything more than inspecting paperwork months after a trial has ended that ever even occurs. Fisher says she was surprised that the FDA didn't even bother to follow up on the complaints regarding Pfizer. “You would think if there’s a specific and credible complaint that they would have to investigate that."

A Department of Health and Human Services (HHS) Office of the Inspector General (OIG) released a report in 2007 regarding FDA oversight of clinical trials between 2000 and 2005. According to the report, FDA only inspected 1% of clinical trial sites. And that number has only decreased in recent years, only 50 such visits occurred in the 2020 fiscal year.

Jackson called and emailed the FDA regarding the many credible and concerning problems with the Pfizer vaccine trials, instead of a commendation for protecting consumers' safety she was told she was "not a good fit" for the company. Any company willing to ignore basic scientific research protocols, ethics and willing to cover up at least a dozen issues that could pose a serious public health risk and invalidate the entirety of the vaccine trials is not one I'd want to "fit in" with anyway.

FDA responded to Jackson's email, thanking her for raising the concerns to them and pointing out that they would not be able to comment on any forthcoming investigation. A few days later she also received a call from an FDA inspector to talk about the report but was once again informed no information regarding the investigation process, if one was occurring, would be made available to her.

Pfizer sent a briefing document to the FDA advisory committee in December of 2020 regarding their application for emergency use authorization of the covid-19 vaccine. No mention of any of the issues, which the FDA was well aware of at this time, was noted. Despite the numerous concerns, FDA signed off on emergency authorization the very next day.

The FDA published a summary of its inspections of the trial just this last August. Only nine of the 153 sites were inspected. The Ventavia sites were not on the list. FDA apparently completely ignored the multiple blatant issues with safety, protocol and basic scientific research integrity and ethics. FDA inspection officer explained their serious lapse in their due diligence as follows:

“The data integrity and verification portion of the BIMO [bioresearch monitoring] inspections were limited because the study was ongoing, and the data required for verification and comparison were not yet available to the IND [investigational new drug].”

Numerous other Ventavia employees also either left or were fired. One former official who was separated from the company would text Jackson an apology admitting that "everything that you complained about was spot on."

Former employees spoke to The BMJ anonymously, concerned speaking out would result in "reprisal and loss of job prospects in the tightly knit research community." They were able to corroborate. One was a veteran of dozens of clinical trials, including large-scale trials but never was witness to such a chaotic, "helter skelter" work environment as was present during the Pfizer trials.

“I’ve never had to do what they were asking me to do, ever,” one reported to The British Medical Journal. “It just seemed like something a little different from normal—the things that were allowed and expected.”

She also pointed out that Ventavia seemed concerned about a federal audit, despite the fact that even with evidence shared with the FDA directly, none ever took place. Even after Jackson left, problems persisted including failing to swab trial participants. If someone presented covid-like symptoms such as fever, they may have been listed as covid-positive without any test being run to confirm that. An FDA review memorandum from August even points out that nearly 500 known test subjects were never swabbed.

“I don’t think it was good clean data,” the employee told BMJ regarding the Pfizer covid-19 vaccine trial. “It’s a crazy mess.”

Lab-Leak Theory Back in the Headlines

Another employee who spoke to the respected medical journal also confirmed that in 20 years of research they had never been subjected to such a troubling work environment.

Pfizer has hired Ventavia as a research subcontractor on four other covid-19 vaccine trials (for children, young adults, pregnant women, a booster dose and RSV vaccine trial). Especially when it comes to the potential safety of children and pregnant women, the idea that a lab willing to fake results favorable to the pharma company that hires them is seriously concerning. In some countries, such as Sweden and Denmark, booster shots and/or vaccines for younger people have already been nixed due to multiple deaths of healthy young people following their vaccination.

This is by far not the only case of a Pfizer whistleblower uncovering seriously disturbing details of the inner workings of the pharma industry. Just earlier this year, a Pfizer whistleblower spoke out. From being fired for speaking out about the dangers of Pfizer products to being injured by genetically engineered bioproducts to multiple bribery cases settled out of court and knowingly covering up potentially carcinogenic or otherwise lethal products until the last moment, and to be sure this is not a problem with Pfizer alone, but with the pharmaceutical industry as a whole.

They say "trust the science" but when even some medical professionals and research scientists are trying to warn us about major issues, shouldn't we trust them as well?
Share this article