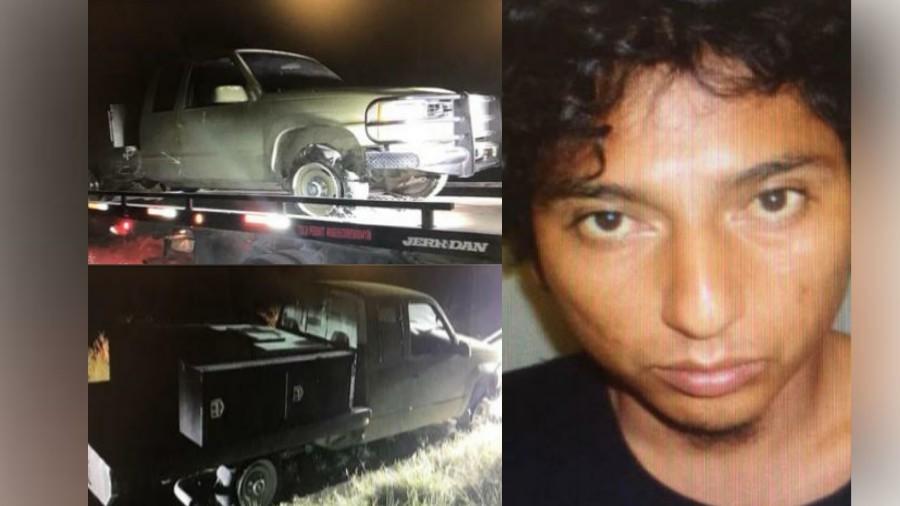 Multiple law enforcement agencies in Texas say that they were forced to engage in a statewide manhunt for an illegal alien wanted on multiple felony charges which involved a high-speed chase that encircled numerous jurisdictions.

Police say the illegal alien is a Mexican National, originally from Veracruz, Mexico; who stole a Chevrolet flatbed pickup truck from Kinney County, after holding the owner of a ranch and his family hostage near Brackettville, Texas until he was able to flee with numerous valuables and the truck.

The truck then headed towards a United States Border Patrol checkpoint just West of Uvalde along US Highway 90; where the illegal alien driver failed to stop and blasted through the checkpoint endangering the lives of countless Border Patrol Agents and civilians.

At this point, the Texas Department of Public Safety Troopers, Uvalde Police Department, Sabinal Police Department, and Uvalde County Sheriff’s Deputies all engaged in a high-speed pursuit to tail and stop the heavy-vehicle before it caused damage to either civilian property or killed a pedestrian or passerby.

Heading Eastbound into the City of Uvalde, the Uvalde Police Department began to set up heavy blockades of every intersection throughout the city bringing all traffic citywide to a screeching halt; in order to stop the dangerous illegal alien.

Many residents in the vicinity of the chase were warned via public broadcast to stay off the roadways and avoid the area in order to ensure their safety.

Just as the vehicle made it around five miles East of Knippa, it hit one of the spike strips laid out by law enforcement and the tires began to deflate on the Chevrolet flatbed.

While the sole occupant of the vehicle was the illegal alien from Veracruz, Mexico; he was unable to flee law enforcement in a foot pursuit attempt and was immediately taken into custody.

Police also found a stolen firearm in his possession, meaning this could have been a far worse incident.

The enormous cost to the city, local, and state police departments, as well as those to the United States Border Patrol checkpoint; is further proof of the soaring dangers which a single illegal alien can pose to the lives of Americans and the wallets of taxpayers.

While we commend the law enforcement agencies involved in this pursuit and thank them for the job well done; we must remember that they risk their lives every day in order to keep Americans safe from criminals.

Those law enforcement agencies shouldn't have to bear the burden of the additional risks posed by illegal aliens.

Just yesterday, <a href="https://thegoldwater.com/news/28613-Texas-55-Illegal-Aliens-Detained-by-Authorities-in-Human-Smuggling-Bust"> 55 illegal aliens were detained in a human smuggling operation </a>that also happened in Texas, where they were found crammed into the back of a tractor-trailer.

The same thing happened on May 23rd, when<a href="https://thegoldwater.com/news/26925-South-Texas-Semi-Trailer-with-88-Illegal-Aliens-Inside-Busted-by-State-Highway-Patrol"> 88 illegal aliens were found in the back of a tractor-trailer </a>that was traveling through Texas.

Also in May, an<a href="https://thegoldwater.com/news/26445-ICE-Sweep-Rounds-Up-Illegal-Aliens-and-Child-Sex-Traffickers-in-Major-Takedown"> ICE sweep detained 78 illegal aliens </a>of which 62 had previous convictions inside the United States of America for either child sexual assault or child sex trafficking.

These are not innocent people.

Not to mention, just last Friday the<a href="https://thegoldwater.com/news/28155-DOJ-Releases-Shocking-2018-Illegal-Alien-Crime-Statistics-and-Media-is-Silent"> Department of Justice released their 2018 Illegal Alien Crime Statistics </a>for the first quarter of 2018 and the results are absolutely shocking.

You can get involved by contacting your elected officials, as well tell you on a daily basis here at The Goldwater, by visiting one of the links below and telling Congress to fund and build President Trump's Border Wall and to hold cities and states who have “Sanctuary” laws accountable.

You can also report suspicious activity to the Immigration and Customs Enforcement (ICE) agency.

The Mexican National is now in the Uvalde County Justice Center on three felony charges including possession of a stolen firearm, evading arrest with a vehicle, and unauthorized use of a vehicle.

If it's determined he was previously deported he will also face federal charges of illegal re-entry, which could mean up to twenty years imprisonment.

Kinney County and Uvalde County Sheriff’s Deputies are working along with local agencies in order to return the stolen property to the owners, who are reportedly safe, although shocked by what they were forced to endure at the hands of this single, dangerously violent illegal alien.

I'm so sick of these damn illegal aliens and I'm 100% Hispanic and proud. Girl you're right lock these mfs up! I have kids I want to grow up safely and don't need this crap around them! They need to follow our laws!

Imagine the costs to those police departments and the taxpayers over just this one damn violent illegal alien piece of shit. I'm sick of it.

Poor Texas. I wouldn't want to live there. No wonder so many Dumbocrats are moving there and everyone else is leaving

Enough is enough we need to start shooting these people

Just kill him. He's never going to follow the law. Send him back with a bullet in his skull. Send a message.

Mexicans are bad but don't forget about the THIEVING, LYING, FAT, UGLY Haitians. The invasion is coming from everywhere.