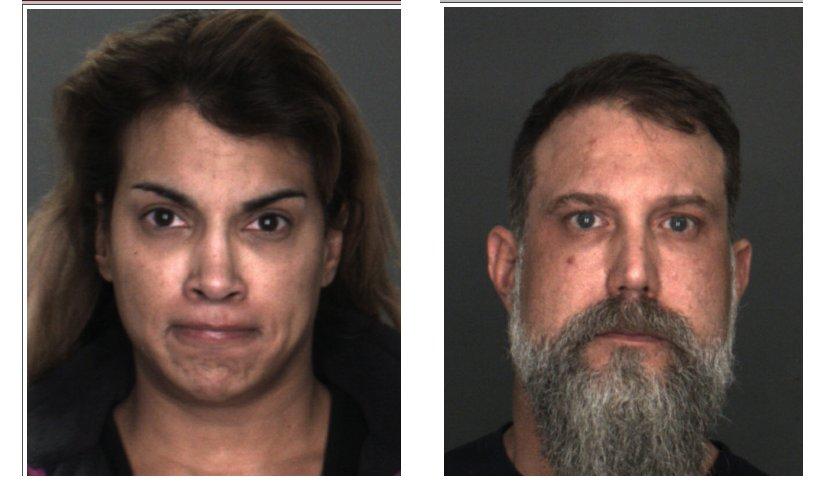 Melinda Smith, stage name Mercedes Carrera, and her producer/director husband Jason Whitney have been arrested for abusing a young girl on January 31. The couple are accused of "inappropriate touching, oral copulation and digital penetration.”

https://t.co/eXL5Lejb2B MERCEDES CARRERA ARRESTED AND CHARGED WITH ABUSE OF A CHILD - Drunken peasants on Carrera, who was on their show a bunch.


In addition to the child sex abuse charges, methamphetamines and two loaded guns were found on the premises, detectives found "a large amount of evidence corroborating the victim's statement" related to the alleged crimes including inappropriate touching, oral copulation and digital penetration, which occurred over four months.

Hypocrisy Abounds As The Gunn Goes Off

Mercedes Carrera has released a statement regarding the arrest of her and her business partner/husband:

Last week, my husband and I [were] arrested on charges of molesting my nine-year-old daughter, the absolute worst crime I can imagine. The charges were filed by her father, my ex-partner (a fundamentalist Christian). He is trying to take custody of our child from me. The charges are absolutely false and horrifying, and a last ditch effort to keep me from contact with my daughter for the rest of my life. I am so worried for her. Her life is shattered. Life will never be the same for any of us. We are struggling to make sense of this nightmare. This is a no-bail offense, so we are stuck in jail until we are cleared. We are facing decades in prison and do not even have money for a lawyer. We do not know what to do, but I ask that you all know me for who I am, and know that neither I nor my husband would ever, ever do anything like this to any child, let alone my beloved daughter.

Carrera was at one point involved in the Gamergate movement and was interviewed by the likes of Gavin McInnes and Paul Joseph Watson.

She told us all in this tweet... #mercedescarrera Milo is her spirit animal pic.twitter.com/YM4SkyZGNP


Newsweek is playing up her connection to the "far right," but outlets like The Rebel and InfoWars are certainly not far right. Then again, neither are the Proud Boys a "violent, extremist" organization.

Mike Cernovich, who was also close to Alan Dershowitz, billionaire pedophile Jeffrey Epstein's associate, has a connection to Carrera/Smith. I've personally theorized for years that Cernovich intentionally embellished the truth regarding Pizzagate in order for it to be more easily discredited, the same general rubric as disinfo shills like Alex Jones use daily. That said, due to the connections, this case is already becoming highly politicized. As convenient as it would be if we could just check someone's voter registration to find out if they were sexual predators, reality isn't that cut and dried. Institutional abuse happens at the highest levels, and there's no one side that is alone responsible for taking part, aiding and abetting it.

Beast Of Belgium: Child Exploitation And Cover-Up In The Marc Dutroux Affair

According to an archived thread from 4plebs.org:

>Can I get a quick rundown on how she's connected with GG? So real quickly after the shit at SXSW happened (the shit with Randi Harper that sparked GG), she came up out of nowhere and acted like she was based and redpilled, and gamers clung onto her because they wanted a mommy gf or some shit. Immediately after she not only never once spoke about videogames, she constantly tried to shove her porn onto her followers timelines and made it really obvious early on all she wanted was to expand the market for her "films". She even whined about it on twitter that no one watched her movies.


Why has impotent racist and rapist, alt-right flaming dumpster of a cretin, Mike @Cernovich (still verified, friend of @Jack!) deleted all of his Tweets to paedophile, Mercedes Carrera, a "peer" of his, and a good friend? pic.twitter.com/HKRFZSTL3q


For some reason, Whitney's stage less common alias "Jay Allen" was initially released in the press. On Twitter, Instagram, Gab and elsewhere he's better known as @Daemon_Cins (pronounced "Daemon Sins") and he claims to be a Scottish Rite F&A Mason.

Smith had also mentioned growing up in a Masonic family in now deleted, but archived tweets shared from 8chan:

The before and after on these two is rather stunning.

Photos of Smith and Whitney have been released by the police in case other children were abused by the couple.

Anyone with any information about this or additional cases of abuse that may have occurred is asked to call Rancho Cucamonga police at (909) 477-2800. If you wish to remain anonymous, you can call the We-Tip Hotline at 1-800-78-CRIME (27463).
Share this article

The simplest example in life to see the unfair robbery nature of China communists...(rob money from Chinese,rob work from American)

Seen in "China government has legally stolen 375.23 billions from USA in a single year..." bbs.aboluowang.com/forum.php?mod=viewthread&tid=1062885&extra=page%3D2

​Edit:I take no order from anyone. For those super Nazis, Can you and the followers read English?

​ Or you just don't want true free trade without tariffs?

Come on, Nazis and racists and communists, just ignore the truth, attack me and remove.

So many words for the obvious. NEW WORLD ORDER aka GLOBALISTS. All world citizens are the victims of the MINNIONS SATANIC MAFIA. MSM.

I simply do not believe this. Nice try deepstate puzzagate Cucks: I’m not buying it.

What the fuck is "digital penetration"?

A.S.U. (or as I call it, ASSU) has harbored child molesters and nigger lovers since they unjustly expelled me in 1997, following the orders of 'president' SNOPES KKKLINTON who feared my reputation and sought to ruin me. Since then, they have harassed and stalked me, and kept me from learning how to drive by ordering packs of feral niggers to attack me. Since then I have lived in forced jobless poverty in Blytheville, awaiting the day when my Teapot Domer Militia will clear the path for me to arise as the greatest genius in history, prevailing over the degenerate liberals.

Sorry pervs, but having sex addicts raising children is an automatic no go. I don't care about the potential for 'good' parenting. Drugs reduce the mind to the level of animals, and we all know that dogs have to be kept away from their own mothers when the bitch is in heat. These fools were raising another generation of whoredom; which will be picked up by the taxpayer in one way or another.