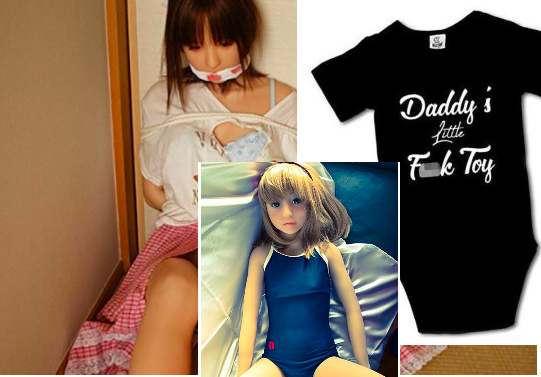 What the hell has the world come to? Apparently, in a world where a slip of the tongue related to political correctness can cost you your livelihood for posterity, this is just fine.

Pedophilia related products are becoming fair game. One of the most recent, but not the only, example are baby jumpsuits with disgusting slogans like "daddy's little f**k toy," "I only look illegal" and daddy's little slut" that were finally pulled by Amazon after massive public outcry.
#YouTubeWakeUp: Who Cares About the Child Exploitation Crisis on YouTube?


Marci Hamilton of the child advocacy think tank Child USA spoke with The Sun newspaper about the items, "It is shocking, and I’m surprised it is there in the first place. It has a way of normalizing the activity [child sex abuse] which is extremely dangerous to children. It is the first time we have seen such wording aimed at pedophiles on clothing for babies. [Amazon] should have much better controls over products for children generally.”

And yes, you read that correctly, it was Amazon the world's largest online retailer who facilitated the sale of these products until just recently. Bear in mind that Confederate flags and anti-vaxxing documentaries are strictly prohibited from sale at Amazon, but child sex isn't considered as much a taboo as the stars and bars.

A company called DVKFP were selling realistic, child sex dolls with guaranteed "hidden delivery." One of the dolls featured a small, undeveloped child with a little girl's headband. In another photo, the doll appeared to be a young teen with torn clothes and a gag in her mouth.

Don't worry though, of course the offensive items have been pulled due to the publicity. Here's a statement from Amazon themselves:

“All Marketplace sellers must follow our selling guidelines and those who don’t will be subject to action including potential removal of their account,” an Amazon spokesman said in a statement. “The products in question are no longer available.”

Oops, that's actually a statement they made in April of last year after getting busted profiting off of child sex dolls sold to pedophiles.

To be fair, their most recent statement was nearly identical: "All Marketplace sellers must follow our selling guidelines and those who do not will be subject to action including potential removal of their account. The product in question is no longer available." Their go-to answer whenever something they "banned" and doesn't sell anymore ends up in the media.

Between July and August of 2017, several articles were published in the US and UK regarding Amazon selling child sex dolls. UK's National Crime Agency (NCA) has reported that "these purchases can indicate offenses against children."


Then there's Caroline Bosmans, who are vying for the Comet Ping Pong award for creepiest Instagram posts involving children.

Something is Terribly Wrong With The Caroline Bosmans Children’s Clothing Line https://t.co/Z3oPbZliOy pic.twitter.com/bj1oD5lduF


Recurring themes include children posed in sexualized or dehumanizing ways. Other odd scenarios that keep resurfacing are suffocation, children posed as if drugged or dead, and the use of heartwarming catchphrases like "Eat People."

Caroline Bosmans also apparently loves posing kids in medical situations. In one, a child in a hospital bed surrounded by medical equipment features carolinebosmans comment: "The kid is alright #alwaysfunwiththiskid #bruisednotbroken" this is just one of many "promo photos" of injured or bruised children. In another post, a picture of a little girl bending over, exposing her underwear is accompanied by the hashtag, #Readytoafterparty? A pervert in the comment section replies, “I’d like to join her ;)”. The Caroline Bosmans account answers: “But first some cocktails!”

To Catch A Vigilante: Is Media More Concerned With Pedohunters Than Rampant Online Grooming?

There are multiple examples of Bosmans Instagram pictures with children bending over, often accompanied by inappropriate comments from followers of the children's clothing brand. However, for many people, this sort of behavior is considered far less dangerous to kids than "conspiracy theories." Priorities, I suppose...

So they ban books that ask important questions about the so call holocaust butSupports Pedophilia.

There are no words to describe the pure Satanic evil that is in this world. Sick. Sick. Sick.

If these people are not themselves destroyed, they will destroy many more lives.

Perhaps the vigilante groups in Ireland are onto something...

On the one hand I despise pedophiles and sex dolls. On the other hand while I find adult sex stupid and sad...I’m not against those for adult purchasers. Women have one purpose to which they were born to fulfill: Sex, reproduction, child rearing and emotional support to their husbands the father of their children. That is biological reality. Therefore as many women today are confused and lost men require an outlet. And if they’ve not found a good traditional woman yet, they need an outlet that is preferable to being abused by stupid fat and angry blue haired feminazis. Also it sends a message to fat irrational and foul tempered western women.

Correction of typo above I meant to say;

I find them sad just not as deserving of legal action and imprisonment which I believe in for the vile producers is f underage sex dolls.

fuck you guys, child sex dolls aren't real children and shouldn't be treated the same as them, they will in fact cause less children to be abused as a result of them being available, but you won't listen to reason anyway

This isn't that bad

Right under this article was another article that said free speech needs to be fought for at all costs. Creating or owning a piece of silicone and metal, no matter what it looks like is considered free speech, it's not a weapon, it's a glorified pocket pussy and to ban it is to be against free speech, so I think you guys are pretty hypocritical lmao. I couldn't give a s*** about sex dolls at all, just calling out your hypocrisy...

can be prosecuted for buying sex dolls that "appear underage" essentially confirms what I had thought all along; the feds, and police don't care about the welfare of children, they are only hunting after pedos to feed their confers AKA the prison industrial complex.

If we cared about children we would had donated more frequently to charity drives that pull them out of poverty. We only care about them when they are being "sexualized" which shows how shitty all of us humans and hypocritical we are.

not into children, you wouldn't make a big deal of it.
The fact that you do confirms my points.

Pedophiles must be put down like the dogs they are.... They are child rapists and gain disgusting pleasure from hurting a child!!!!! damaging a child!!! Child rapists must be put down like pitbulls who bite humans get put down, same for child rapists who are trying to come up from the hells and normalise their disease by playing with words and making child rape normal !!!! well fuck you, not all of us are asleep, fuck you all, soon you will understand what has created life and how that Creator wants life to be preserved!!!!