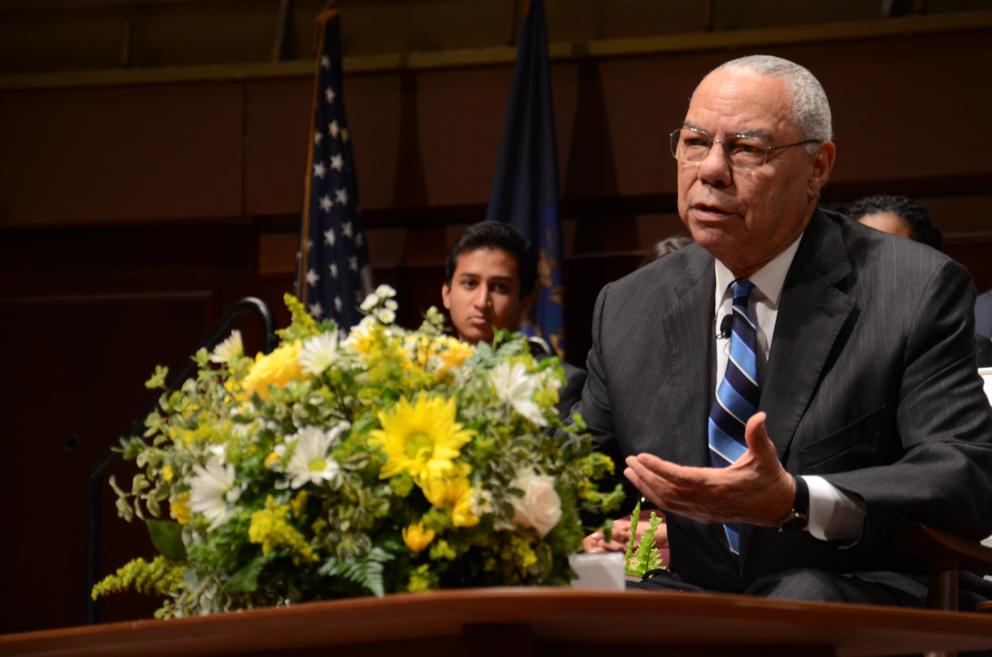 Colin Powell, the first black Secretary of State has died at 84. His death is being reported as due to complications from Covid-19. He was fully vaccinated. Despite deserved criticism for his part in the Iraq fiasco and other Bush-era misadventures, Powell overall enjoyed a distinguished career in the military coming from modest beginnings as a son of Jamaican immigrants in Harlem to one of the highest and most important roles in the leadership of the United States.

Powell joined ROTC while studying geology at City College of New York (CCNY) and fondly looked back on those days. Powell was in Vietnam in 1962 in an advisory capacity and would later be commended for bravery after saving three other soldiers from a helicopter crash. By the Carter era he was working advisory roles in the government. By 1987 he would become the national security advisor under Reagan during what were called the "dirty wars" that involved such actions as the Iran-Contra drug and gun trafficking scandals.

In 1989, George H.W. Bush, Sr. appointed Powell Chairman of the Joint Chiefs of Staff, the highest military role within the US Department of Defense. It was at this time he was pulled into the CIA-backed invasion of Panama, against UN recommendation. This would be followed by the beginning of the 1990 Gulf War. To his credit, Powell initially opposed the idea of using force in Iraq, unlike Bush Jr and Sr. crony Dick Cheney, then Defense Secretary.

Powell would butt heads with the Clinton administration from the idea of allowing gays in the military, which Powell opposed to squabbling with Madeleine Albright regarding Bosnian military intervention. Once again, Powell erred on the side of non-intervention.

There was brief talk of a potential 1996 run against incumbent Bill Clinton, but Powell didn't have taste for campaigning. He would be appointed Secretary of State in 2000 by George W. Bush, Jr. After 9/11, once again Powell despite his "doctrine" of not putting enlisted men and women in harm's way without a direct threat to the U.S. posed, Rumsfeld and, once again, Cheney were more intent on major military action.

Powell was put in the unenviable role of admitting the much touted "weapons of mass destruction" never existed after Saddam Hussein had been deposed. Once again, the president and the media had worked together to create a false narrative to sell a war just as had occurred in the previous Gulf War. "War," Colin Powell once said, "should be the politics of last resort. And when we go to war, we should have a purpose that our people understand and support."
Share this article