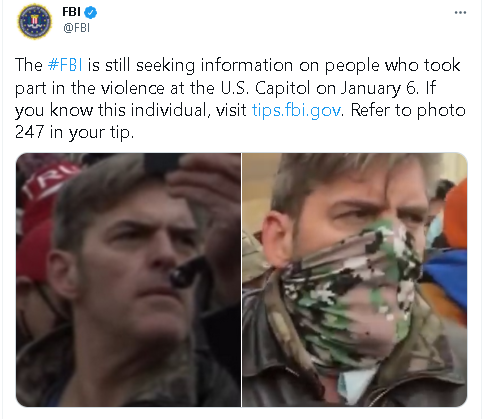 Jay Johnston, who some may remember from the 90s sketch comedy troupe Mr. Show w/ Bob Odenkirk and David Cross, is in a bit of hot water... He has possibly lost his job voicing a character on the Fox cartoon Bob's Burgers. The reason? He happened to be in attendance at the January 6th rally in Washington, D.C. There's no evidence he "stormed the Capitol" nor committed any violent or illegal act. Nope, simply being present was enough to do the trick. And it seems several of his fellow comics are pretty ok with that. So long as it's not them, right?

I know it is not him but this guy looks like Jay Johnston from Mr. Show with Bob and David. pic.twitter.com/lcuvhDUZ3L

To date there seems to be no direct evidence he took part in actually tresspassing on the Capitol building, though he's being treated as "yet another insurrectionist." Then again, to date, no one from that event, neither the protest, the tresspassing nor the riot (three separate events, however close their proximity) has been charged with insurrection. Insurrection is a federal crime and if even one single person could feasibly be charged with it, then wouldn't they? Nah, why should they have to when the media is more than happy to convince people that a deadly rebellion was underway and the only solution will be more tighter restrictions and heavier surveillance regardless whether you veer right or left.

“So there I was, on the steps of the Capitol! On my way to assassinate Mike Pence…” https://t.co/sapdjoBE7F pic.twitter.com/wajyFyUc31

Jay had a career spanning decades, in addition to Mr. Show and Bob's Burgers he was featured on movies and television shows like Arrested Development, Anchorman, The Sarah Silverman Show, Moral Orel and others. Sadly, it's quite likely that the latest events may put a monkey wrench in future acting plans.

It wasn't near as violent as the media would have you believe. The same people who ordinarily would be clamoring over police shooting an unarmed person seem to be. Even Lindsey Graham was urging Capitol police to just shoot at protestors. Despite all the evidence that any intel about the events was specifically ignored to create a perfect media spectacle to set blueanon and Russiagaters' heads atwirl, the event seems to have done what it was meant to do. Amp up division and paranoia between everyday people.

Rumors that this may have been Johnston have been surfacing since before the Spring. Tim Heidecker, who helped ensure that Sam Hyde and Million Dollar Extreme were cancelled, claimed he had "credible" sources that had informed him it was Johnston.

Things were likely already in the works behind the scene, and in part due to other comedians like Wareheim gossiping behind his back. Though the cancel character Johnston played, Jimmy Pesto, was noticably absent from any episodes this season they had not made it official. Chances are, if the buzz had worn off, they might have let him return seeing its all about the bottom line anyway. Daily Beast reached out to Fox on Friday but they had no comment, same with a Disney spokesperson (Fox, like Marvel, is now property of Disney). Johnston also did not return calls when comment was requested.

Daily Beast also refers to Johnston as "a potential participant in the insurrection." Bear in mind, Johnston has not been charged with anything. Much less an "insurrection" one of the most serious of federal crimes, still punishable by death. How is he described as taking in part in this supposed treasonous act? Well, he was apparently "visible alongside rioters taking pictures as Trump supporters push their way toward the building."

The #FBI is still seeking information on people who took part in the violence at the U.S. Capitol on January 6. If you know this individual, visit https://t.co/iL7sD5efWD. Refer to photo 247 in your tip. pic.twitter.com/CetMHzU190

As of the time of this writing, Snopes, however still has his attendance as "unproven" however, to be fair, they tried to pass off the photo of Ghislaine Maxwell and Jeffrey Epstein with the pope as "unproven" until after the image was added to evidence in the trial.

@snopes Guess it's time to update this - https://t.co/EJFWz7zYQY

It's a shame, of course, to see a talented person blacklisted. Johnston has an incredible talent for the sort of oddball, eccentric comedy that I have a soft spot for. Honestly, with the likes of James Franco still getting work, its evident that #MeToo didn't quite "take" in Hollywood, but I'm sure we will see more cases like these where, despite harboring child predators and rapists, the entertainment industry will drum out anyone who veers too far from the accepted standard of opinion.

As for the future of Jay Johnston and his career, I have no clue. All I can say for certain is I'll never be able to watch that episode of Mr. Show with the multiple skits about a guy who wants to rise up against the government and create his own free country the same way ever again.