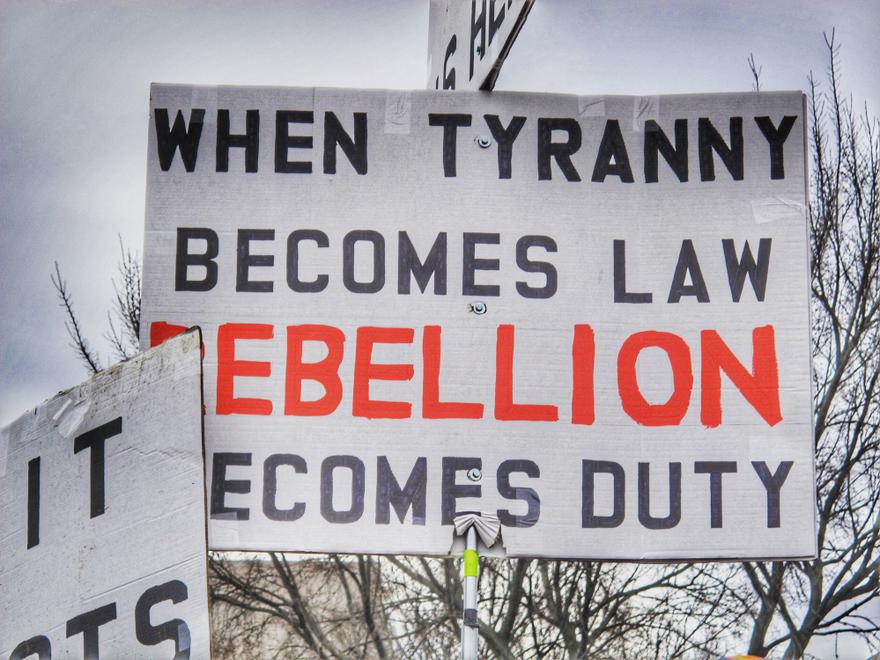 An anarchist has been arrested for online posts related to January 6th. A UK member of parliament is stabbed by a man on the radar of counter-terrorism and his death sparks cries to end anonymity on social media throughout the United Kingdom. A drone strike whistleblower is held in a Communications Management Unit cell for high profile terrorists to keep him from speaking to press or anyone else. Julian Assange's assassination is discussed and planned by the CIA with the help of Las Vegas casino mogul and hardcore Zionist Sheldon Adelson before his extra-judicial kidnapping on behalf of the war criminals he exposed via Wikileaks. What do these stories have in common? They act as a barometer for the current climate as it relates to free speech and journalistic freedom.

Interview with William Ramsey about Global Death Cult, The Base, Atomwaffen, Order of 9 Angles

What is just as interesting as the dangerous precedent set by the years of prison time Daniel Baker was sentenced to is his personal history and connections. But first, the relevant particulars. Daniel Baker is described as an anarchist and "anti-fascist activist" by The Intercept. Baker was a medical technician and yoga teacher with no prior convictions, but has been held for 10-months of pre-trial detention thus far, seven months of which was in solitar confinement.

Left Twitter logic is that everyone in Northern Syria is a CIA war criminal except for Brace Belden who's on record of actually calling in US airstrikes on targets that resulted in civilian casualties.

Whether you agree with Baker's politics or not, he appears to have made no specific threats despite advocating protection if far-right protesters were to attempt to similarly storm the state capitol building in Florida. Considering all of the interesting fed and informant related shenanigans that continue to leak regarding the January 6th incident, Baker's military history which involves going AWOL from the Army to later join the YPG (the Kurdish militia that fought ISIS). Brace Belden, leftist podcaster from TrueAnon and Chapo Traphouse also has a history involving enlisting in the YPG and some other activities and associations some conspiracy minded persons have labeled "spook adjacent."

January 6 Foreknowledge by Police and Feds

Brace is Mossad. Though using Brace's own logic that would make him CIA as well :)

"This(Epstein affair) is a CIA op, it really doesn't connect to Israel except to the extent that Israel is also a CIA op."-Brace Belden https://t.co/PCjb9SvQiY

Baker, while engaging in no specific actions or specific and actionable threats did encourage a "call to arms for like-minded individuals" who he hoped would "join him in encircling any protestors and confining them at the Capitol complex using firearms."

Now first off, this is what on the imageboards would be decried as "fedposting." Inciting others to violent or criminal actions has always been looked on with skepticism by users of anonymous imageboards. The "glowing/glowies" meme is just one example of this attitude. And honestly, whether you're a fed or a useless idiot, if you see someone talking like this regardless of their ideology, I'd suggest you ignore them and keep outside any circles they frequent. Agents provocateurs and useless idiots can be equally damaging regardless of intent. Whether he had worked as an informant or was just playing into the hands of the feds by agitating in his spare time is a moot point.

The treatment of Baker is similar to others who have been arrested in relation to January 6th. One defendant is alleging rights violations due to surgery for a broken wrist while in custody has been delayed since June.

While popular online figures like Tim "Baked Alaska" Gionet were involved in the breach of the Capitol and seemed to have skated free, along with members of the Oath Keepers, others seem to be held in deplorable conditions with no real timeline for justice to be served.

We are entering a time in which if free speech is threatened, or government overreach is present, activists should try and put aside ideological differences in order to focus on the danger that faces us if we continue down this path.
Share this article