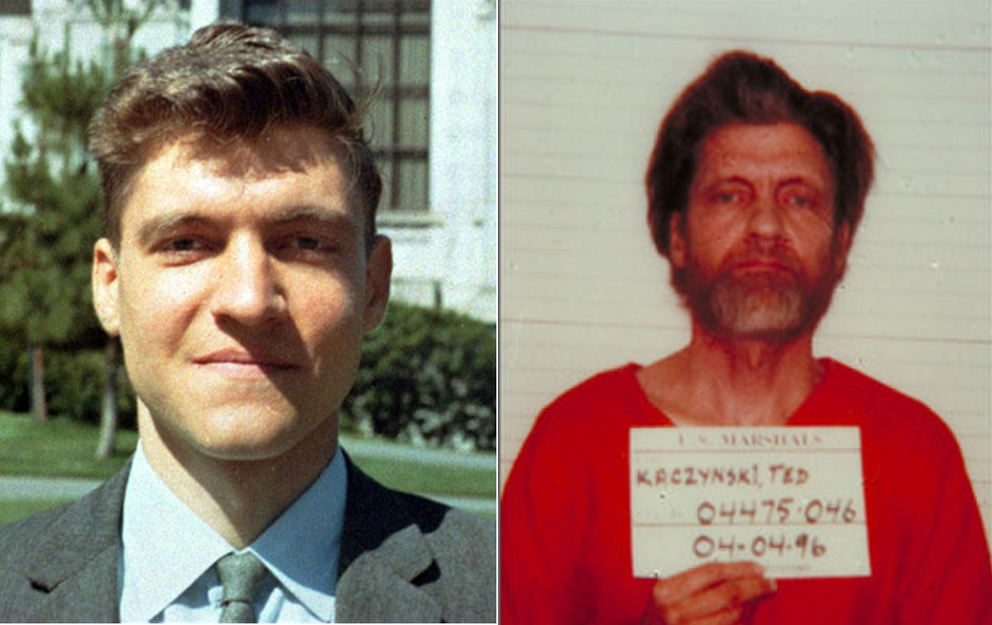 In 2003, writer and director Lutz Dammbeck released the German documentary Das Netz (released in the US as The Net: the Unabomber, LSD and the Internet. The film goes into some of the many stunning connections between the burgeoning technology of information theory, computers, cybernetics, mind control, the counterculture... and how all of that ties into the story of Ted Kaczynski.

In this series, we will be exploring the "six degrees of Jeffrey Epstein" that connects the disgraced pedophile, trafficker and financier to Kaczynski by way of some of the primary figures in the creation of Silicon Valley as well as the creation of the counterculture in the 1960s and beyond.

Kaczynski, as the documentary points out, was convicted of mailing bombs to universities, scientists and airports over a period of decades. In fact, Unabomber, is actually a law enforcement designated shortening of "University and Airport Bomber." One incredibly interesting thing about the documentary that was pointed out by David Livingstone, author of Transhumanism: History of a dangerous idea is the connection between the network that Kaczynski is alleged to have attacked and Jeffrey Epstein.

The documentary emphasizes how fellow mathematician Kurt Gödel died in 1978. Gödel was paranoid and had become convinced he was being poisoned. This sort of behavior may bring to mind, to some the tragic story of John Nash, the real life mathematician, paranoiac and games theory innovator responsible for the Nash equilibrium and known as the main character in the award-winning film A Beautiful Mind.

Nash took part in the Macy Conferences, the CIA front that connected the social sciences to the hard sciences and the burgeoning field of info tech. AI pioneer Marvin Minsky was also involved specifically in the conference at Dartmouth the year that Nash took part. Nash would be diagnosed with paranoid schizophrenia, though there have been those who have purported he may have been a target of the CIA's MK-Ultra mind control program. Considering his closeness to people who were involved in the program, this idea may not be as far-fetched as it initially sounds.

MIT scientist, Minsky, was alleged to have been one of many scientists, world leaders and other powerful and influential people who Epstein lured with underage sex. This, however, is not the only tie between Epstein and the Unabomber. The documentary interview Stewart Brand, a seminal figure in both the counterculture, psychedelic, commune, self-sustained living and early computing scenes.

Brand's close friend and associate John Brockman is also interviewed. Watching the documentary one thing that early on caused warning bells to go off was a scene in which the camera zooms in on the website of Edge.org, the science publication funded in part by the so-called "Billionaires' dinner." Brockman has been referred to as the "intellectual enabler" of Epstein. He was vital in introducing Epstein to others in the science world.

Like Brand, Brockman was also tied to the world of psychedelics, avant-garde art and literature and counterculture. These strange and seemingly disparate worlds that fomented what would become the Silicon Valley ethos, borne by way of Esalen and its ilk.

Brand tweeted in 2019 that before Epstein's "(deservedly!)" bad reputation needed laundering he was already funding science. "It was a prior genuine interest" he claims. This may be so, but we know that the FBI and police in New York were made aware of who Epstein was and what he was doing as far back as the 90s. As pointed out however, his "bad reputation" has been a thing for quite a while. People have known what Epstein was doing for a while, despite the fact that it didn't make major news until shortly before his death. Even after he was funding science and the likes of MIT's Noam Chomsky have argued Epstein isn't nearly as bad as Republican donor David Koch due to global warming concerns. (Chomsky was one of many scientists at MIT and elsewhere who had his coffers filled by Epstein cash infusions).

Bear in mind that Epstein was funding a lot of science long before he had a (deservedly!) bad reputation to launder. It was a prior genuine interest.

Not everyone was buying Brand's "smokescreen" story of how and why Epstein was able to go on for so long. Someone shares a photo of Brand with two young girls purported to have been flown in on Epstein's "Lolita Airlines." Brand is flanked by what appears to be two teenage girls. Not just Brand but other figures tied to this same current both in science and literature, such as Marshall McLuhan, cyberneticist Gregory Bateson and others.

Dammbeck also reaches out to John Brockman himself, an important figure in the intersection of the underground worlds of both the hard science of computers and the arts. Brockman would bridge many worlds, that of Brand and his Whole Earth Catalog hippies as well as that of what would become the geek masters of the universe of Silicon Valley.

Brockman was involved in "happenings" such as those put on by Andy Warhol that resulted in the Velvet Underground. He was like a connective tissue between various subcultures spending time with scientists as well as the likes of experimental music superstar John Cage.

When multimedia art became popular he found his role as the marketer of the "digerati" quite stimulating and profitable. Considering his closeness to Edge.org the Epstein funded science publication, maybe a little too stimulating... But what does all this have to do with the Kaczynski?

Dammbeck points out that it seems that the Unabomber's stated victims are often connected to what he terms the "Brockman network." Of course there are the likes of Kirby Sommers, who makes unsubstantiated claims about Epstein such as his supposedly being tutored by Kaczynski at one point. Despite a minefield of disinformation, there are some rather compelling links between these various circles, this network/net, Dammbeck explores in his documentary.

Brockman in his floppy hat and crumpled overcoat looks like some self styled Indiana Jones type. His "Expanded Cinema Festival" was highly important to the rise of multimedia art that would inspire some of the zine and mail art of the 70s and "video art" of the 80s and 90s. The confluence of forces that he managed to wield and market made him an indelible fixture on multiple scenes. It was John Cage who would hand Norbert Weiner's Cybernetics book over to Brockman, in fact.

What Do We Know About Jeffrey Epstein's Judge Donald Hafele?

One aim of the multimedia philosophy was "rearranging the senses" which sounds similar to the aim of Rimbaud, using drugs, alcohol and decadence to "derange the senses" to create a reality that corresponds to one's desires and will. Brockman friend and client Stewart Brand would be tied to Ken Kesey, the "acid tests." He also coined the term "personal computer." LSD guru and CIA asset Dr. Timothy Leary would also heavily push the computer current in the 80s and 90s around the same time that Apple's Steve Jobs was experimenting with psychedelics.

Brand would also be responsible for the first ever alternative computer network, separate from the military network the Arpanet, centered around nodes at various universities long known to have worked with the military-industrial complex and intelligence. "The Well" it was called. This was a time of great techno-optimism that lasted on into the early 2000s carried along by the likes of Douglas Rushkoff.

Brand, like Kesey, had military ties. He had been a Lieutenant in the US army, stationed at Ft. Dix, New Jersey. On the weekends he would head to the lower east side of New York where he spent time hanging out with artists around 1959-1960. This would eventually lead to Brockman's involvement in USCO (US Company, a group of artists and engineers, foreshadowing the role Brand would have tying these seemingly unrelated worlds together).

An apparent coincidence or seeming synchronicity led to Brand becoming involved with Kesey and the Merry Pranksters. Brand had been taking photographs at the same reservation that the chief from One Flew Over the Cuckoo's Nest was supposedly from. This, according to the tale told by Brand, is how he ended up with an in to meet Kesey via a mutual friend.

Next thing you know, Brand would be on the bus, Furthur, the iconic Merry Pranksters van was driven by arch-Beatnik Neal Cassady. The house band for the Pranksters' "acid tests" were a little group called The Warlocks. They would later become famous as the Grateful Dead.

And that's just the tip of the iceberg as far as the many weird and varied connections in this web of intrigue involving the world wide web, security state authoritarian tech, the rise of Silicon Valley and the Unabomber.